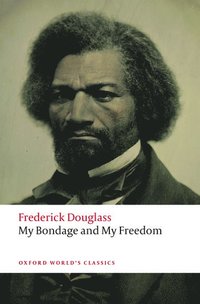 My Bondage and My Freedom

av Frederick Douglass
Häftad Engelska, 2019-11-28
99
Köp
Spara som favorit
Finns även som
Visa alla 8 format & utgåvor
My Bondage and My Freedom is the second of Frederick Douglass's full-length autobiographies. An important slave autobiography, it is significant both for what it tells us about slave life and about its author.
Visa hela texten

Celeste-Marie Bernier is Professor of US and Atlantic Studies at the University of Edinburgh. A winner of the Philip Leverhulme Prize, her research is rooted in the fields of literary studies, slavery studies, African American studies, and African Diasporic Studies. She is the author of several books, including including Characters of Blood: Black Heroism in the Transatlantic Imagination (University of Virginia Press, 2012; winner of the 2013 British Association for American Studies Book Prize) and Stick to the Skin: Representing the Body, Memory, and History in Fifty Years of African American and Black British Visual Arts (University of California Press 2018), and has published extensively on Frederick Douglass. She is also the Co-Editor-in Chief of the Journal of American Studies, published by CUP.

Introduction Note on the Text Select Bibliography A Chronology of Frederick Douglass My Bondage and My Freedom Appendix: The Heroic Slave Explanatory Notes