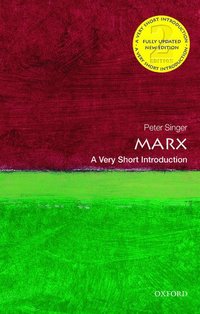 av Peter Singer
Häftad Engelska, 2018-03-22
91
Köp
Spara som favorit
Marx is one of the most influential philosophers of all time, whose theories about society, economics, and politics have shaped and directed political and social thought for 150 years. In this new edition, Peter Singer discusses the legacy and impact of Marx's core theories, considering how they apply to twenty first century politics and society.
Visa hela texten

The Observer An admirably balanced portrait of the man and his achievement.

Peter Singer is Ira W. DeCamp Professor of Bioethics in the University Center for Human Values at Princeton University, a position that he now combines with the position of Laureate Professor at the University of Melbourne. An Australian, in 2012 he was made a Companion to the Order of Australia, his country's highest civilian honour. His books include Animal Liberation (1975; Bodley Head, 2015) Practical Ethics (1979; CUP, 2011), The Life You Can Save (Picador, 2010), and The Most Good You Can Do (Yale University Press, 2015).

1: A life and its legacy 2: The young Hegelian 3: From God to money 4: Enter the proletariat 5: The first Marxism 6: Tracing the development of the Materialist theory of history 7: The goal of history 8: Economics 9: Communism and revolution 10: Was Marx right? 11: Is Marx still relevant?Further ReadingIndex