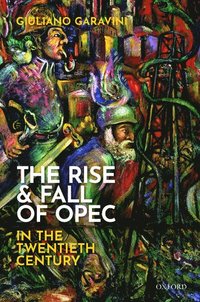 The Rise and Fall of OPEC in the Twentieth Century

av Giuliano Garavini
Inbunden Engelska, 2019-07-25
379
Köp
Spara som favorit
Skickas inom 7-10 vardagar.
Gratis frakt inom Sverige över 159 kr för privatpersoner.
Finns även som
Visa alla 1 format & utgåvor
The most comprehensive history of the Organization of the Petroleum Exporting Countries (OPEC) and of its members, this study takes the reader from the formation of the first petrostate in the world, Venezuela, in the late 1920s, to the global ascent of petrostates and OPEC during the 1970s, to their crisis in the late-1980s and early- 1990s.
Visa hela texten

Survival: Global Politics and Strategy The author traces the history and influence of OPEC from its for-mation to its downfall in the late 1980s and early 1990s.


Journal of Colonialism and Colonial History The Rise and Fall of OPEC is a masterful book that contradicts the well-worn but essentialist understandings of oil as the root of authoritarianism, Middle East wars or environmental catastrophe.


Robert Vitalis Garavini does much more than simply set the record straight. He reorients our view of the international organization away from the overblown and exaggerated accounts of oil-weapon-wielding-sovereigns holding the West hostage.


Gregory Brew Garavini's book is more than a history of OPEC, "one of the most recognizable acronyms in the world" (9). It aspires to be a global history of oil's role in shaping the twentieth century.


David Painter The Rise and Fall of OPEC in the Twentieth Century is an outstanding contribution to the international history of the twentieth century and deserves a wide audience.


Ellen R. Wald This is not just a book about oil markets, the economy, and the oil industry. Scholars of energy and geopolitics will find a succinct and focused analysis of the development of Organization of the Petroleum Exporting Countries (OPEC) 'petrostates,' the organization itself and the role it played the economic and political development of the twentieth century.


Adriana Castagnoli, Il Sole 24 Ore [translated] The thesis of The Rise and Fall of OPEC is that the international cooperation among petrostates has constituted one of the most powerful drivers of the international history of the 20th Century


The International Spectator Garavini's study [is] an essential source for those who have an interest in the history of OPEC and oil-producing countries, providing unprecedented details in a book that is incredibly well researched and updated.


Michael Franczak, Cold War History No book about oil and the world economy has had more of an impact than Daniel Yergin's 1990 masterpiece The Prize [...] It may not get its own miniseries, but Giuliano Garavini's Rise and Fall of OPEC in the Twentieth Century is no less groundbreaking for its subject.


Clemens Huemeriehner, Sehepunkte Garavini has made an important contribution to the history of the oil resource ... The author's courage to pursue a large number of actors over a long period of time leads to a complex narrative that will be the reference to OPEC's history for the foreseeable future...


Robin Mills, The National ... a unique look into the organisation's internal decision-making... detailed and carefully researched book... a corrective to western-centric accounts of the organisation and an essentia...

Giuliano Garavini is an Italian historian, currently Senior Research Fellow in the Humanities at NYU Abu Dhabi. His main research interests include European integration, decolonization, and global struggles over natural resources. He has taught classes at various universities and institutions, including the Graduate Institute in Geneva, the European University Institute in Florence, and NYU Abu Dhabi. He has published on the interconnection between European integration and decolonization (After Empires, 2012), and on the global history of petroleum and of energy, in particular on the origins and significance of the 1973 'oil shock' (Oil Shock: The 1973 Crisis and its Economic Legacy, 2016) and on the 'counter-shock' in 1986 (Counter-Shock: The Oil Counter-Revolution of the 1980s, 2018).