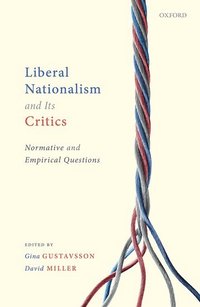 Liberal Nationalism and Its Critics

Gina Gustavsson is an Associate Professor at the Department of Government, Uppsala University. Her work spans political theory and political psychology, and has been published in Ethnicities, Ethnic and Racial Studies, Political Studies, The European Political Science Review, The Review of Politics, and The Cambridge Companion to Isaiah Berlin. She is also the author of a forthcoming book on romantic liberalism. Half-Swedish and half-Estonian, she has always had a keen interest in national identity and immigration. David Miller is Professor of Political Theory at Nuffield College, Oxford and a Visiting Professor of Law and Philosophy at Queen's University in Kingston, Ontario. He has been a Fellow of the British Academy since 2002. He has written widely on issues of national identity, citizenship, territory, and immigration, attempting throughout to build bridges between political philosophy and the social sciences. His next book will defend the idea of self-determination against its many critics.