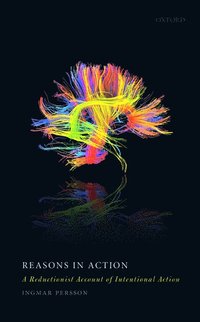 av Ingmar Persson
Inbunden Engelska, 2019-09-11
469
Köp
Spara som favorit
Skickas inom 10-15 vardagar.
Fri frakt inom Sverige för privatpersoner.
Ingmar Persson offers an original view of the processes of human action: deliberating on the basis of reasons for and against actions, making a decision about what to do, and implementing the decision in action in a way that makes the action intentional.
Visa hela texten

Ingmar Persson is Emeritus Professor of Practical Philosophy at the University of Gothenburg and Distinguished Research Fellow at the Oxford Uehiro Centre for Practical Ethics. He received his PhD in practical philosophy in 1981 before becoming a Junior Research Fellow, Lecturer, and then Professor in the same discipline at the University of Lund, Sweden. Persson then moved to Gothenburg to take up the chair in practical philosophy in 2004. His publications include The Retreat of Reason (Oxford 2005), From Morality to the End of Reason (Oxford 2013), Inclusive Ethics (Oxford 2017), and Unfit for the Future (Oxford 2012, with Julian Savulescu).