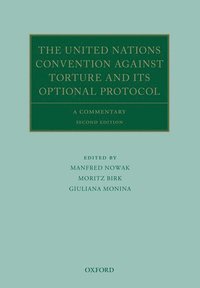 The United Nations Convention Against Torture and its Optional Protocol

Manfred Nowak was appointed as independent expert leading the United Nations Global Study on Children Deprived of Liberty in October 2016. He is Professor for International Human Rights at the University of Vienna, where he is the scientific director of the Vienna Master of Arts in Human Rights and co-director of the Ludwig Boltzmann Institute for Human Rights. He serves as Secretary General of the Global Campus of Human Rights in Venice. Manfred Nowak has carried out various expert functions for the UN, the Council of Europe, the EU, and other inter-governmental organizations. He served for many years in various functions as UN Expert on Enforced Disappearances (1993 to 2006) and as one of eight international judges in the Human Rights Chamber for Bosnia and Herzegovina in Sarajevo (1996 to 2003). He served as UN Special Rapporteur on Torture (2004 to 2010), where he visited numerous institutions throughout the world where children were deprived of liberty in unimaginable conditions. Moritz Birk is Head of the department 'Human Dignity and Public Security' at the Ludwig Boltzmann Institute of Human Rights. He joined the Institute in 2009 as Assistant to the UN Special Rapporteur on Torture (-2010) and has since implemented numerous research and technical capacity projects on torture and ill-treatment worldwide. e lectures. Before joining the Institute he worked with the UNHCR and human rights organisations in Ghana, Mexico, Senegal and Sweden. He holds an LL.M. in International Human Rights Law, studied law in Germany and France and is certified as organisational consultant. Giuliana Monina is researcher at the Ludwig Boltzmann Institute of Human Rights - Human Dignity and Public Security Department. She joined in 2016 and has since focused on several research projects on the topics of torture and ill-treatment as well as migration and asylum. She has completed her legal studies at the Universities of Bologna. Before the Ludwig Boltzmann Institute of Human Rights, Giuliana was a practicing lawyer in Italy and has worked with several human rights organizations, including the European Union Agency for Fundamental Rights.