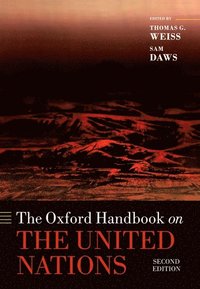 The Oxford Handbook on the United Nations

av Thomas G Weiss
Häftad Engelska, 2020-04-14
444
Köp
Spara som favorit
Building on the success of the first edition, this volume offers a revised and updated analysis of the UN, and will be an essential point of reference for all those working on or in the organization.
Visa hela texten

Abiodun Williams, United Nations Association - UK This Handbook will contribute to a better understanding of the United Nations, and serve the collective mission of those committed to ensuring that the peoples of the world are able to live, as is their birthright, in the larger freedom which the UN Charter promises to all.

Thomas G. Weiss is Presidential Professor of Political Science at The CUNY Graduate Center and Director Emeritus of the Ralph Bunche Institute for International Studies. He was the 2016 Andrew Carnegie Fellow and past president of the International Studies Association and recipient of its '2016 Distinguished IO Scholar Award', chair of the Academic Council on the UN System, editor of Global Governance, and Research Director of the International Commission on Intervention and State Sovereignty, he has authored or edited some 55 books and written 250 articles and book chapters about international peace and security, humanitarian action, and sustainable development. Sam Daws is Director of the Project on UN Governance and Reform, in the Centre for International Studies, DPIR, at the University of Oxford, and directs the international political consultancy, 3D Strategy. He has spent thirty years in UN-related roles, including as Deputy Director (United Nations, Prime Minister's Post-2015 Development Team) in the UK Cabinet Office; Senior Principal Research Analyst, Multilateral Policy Directorate, FCO; First Officer in the Executive Office of UN Secretary-General Kofi Annan; Executive Director, UNA-UK; Senior Advisor and UK Representative, UN Foundation; and as Visiting Fellow, International Law at Cambridge University. He has co-authored or edited fourteen books on the United Nations.