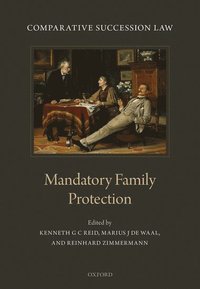 av Kenneth G C Reid
Inbunden Engelska, 2020-10-08
1714
Köp
Spara som favorit
Finns även som
Visa alla 1 format & utgåvor
This book is about the protection from disinheritance. Regardless of what a person's will might say, the closest relatives usually have a claim to some of the deceased's property. The book explores this issue in a sample of countries in Europe as well as in the USA, Canada, Latin America, China, South Africa, Australia, and New Zealand.
Visa hela texten

Frankie McCarthy, University of Glasgow The freedom afforded to authors has allowed for rich analysis... exploring how the law in each jurisdiction has developed.

Kenneth Reid taught law at the University of Edinburgh from 1980 until his retirement in 2019. He was appointed to the Chair of Property Law in 1994 and to the Chair of Scots Law in 2008. From 1995 to 2005 he served as a Scottish Law Commissioner, where he was responsible for a major programme of reform of land law, subsequently implemented by legislation. His many publications focus on property law, the law of succession, trusts law, legal history, and comparative law. Marius de Waal has been Professor of Private Law in the Department of Private Law, Faculty of Law, at the University of Stellenbosch since 1992. He teaches the law of succession and the law of trusts and he is the co-author of standard handbooks in these areas of South African law. Apart from the law of succession and the law of trusts, his publications also include contributions on the law of property and comparative law. He is currently Head of the Department of Private Law in the Faculty of Law. Reinhard Zimmermann is a Director of the Max Planck Institute for Comparative and International Private Law in Hamburg, Honorary Professor at the University of Edinburgh, Affiliate Professor at Bucerius Law School, and Visiting Professor at the Universities of Edinburgh, Stellenbosch, New Orleans, Chicago, Berkeley, Yale, and Auckland. He is the author of numerous books on comparative law and legal history, including The Law of Obligations (OUP, 1996) and The New German Law of Obligations (OUP, 2005).