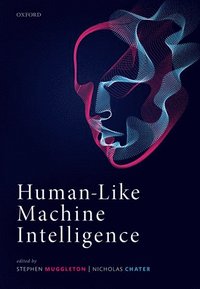 av Stephen Muggleton
Inbunden Engelska, 2021-07-20
729
Köp
Spara som favorit
This book, authored by an array of internationally recognised researchers, is of direct relevance to all those involved in Academia and Industry wanting to obtain insights into the topics at the forefront of the revolution in Artificial Intelligence and Cognitive Science.
Visa hela texten

Stephen Muggleton is Professor of Machine Learning in the Department of Computing at Imperial College London. He is the Director of UK EPSRC NetworkPlus on Human-Like Computing He was the founder of the field of Inductive Logic Programming to which he has made contributions in theory, implementations and applications and has over 200 publications. He has been Executive Editor of the Machine Intelligence workshop series since 1992 and Editor-in-Chief of the series since 2000. In particular he acted as Programme Chair of the Machine Intelligence 20 and 21 workshop on Human-Like Computing (Cumberland Lodge, 23-25 October 2016; 30 th June-3rd July 2019). Nick Chater FBA, Professor of Behavioural Science, Warwick Business School Nick works on the cognitive and social foundations of rationality. He has written over 250 publications and co-written or edited more than a dozen books, has won four national awards for psychological research, and has served as Associate Editor for the journals Cognitive Science, Psychological Review, and Psychological Science. He was elected Fellow of the Cognitive Science Society in 2010, Fellow of the British Academy in 2012, and Fellow of the Association for Psychological Science in 2014. Nick co-founded Decision Technology, a consultancy applying psychology to business; and he is a member of the UK's Committee on Climate Change. His book The Mind is Flat (Penguin/Yale University Press), won the Association of American Publishers PROSE Award for Best Book in Clinical Psychology, 2018.