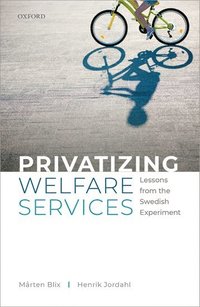 Lessons from the Swedish Experiment

Henrik Jordahl is Professor of Economics at OErebro University with a specialization in public economics. He also directs a research program on the service sector at the Research Institute of Industrial Economics (IFN) in Stockholm. His research is focused on the intersection between private business and the public sector with topics such as tax-financed services, privatization, management, school quality, and voting behaviour. He earned his PhD in economics from Uppsala University and has been an external director of research at the Centre for Business and Policy Studies (SNS) in Stockholm. He is affiliated with Uppsala Centre for Fiscal Studies at Uppsala University and with the international research networks CESifo and IZA. Marten Blix is a research scholar at the Research Institute for Industrial Economics in Sweden. He has a PhD in Economics from Stockholm University and an MSc in Econometrics and Mathematical Economics from the London School of Economics. He has held several senior management positions, including director for the division of budget totals in the Swedish Ministry of Finance, chief economist at the Ministry of Industry, and advisor at the Swedish Central Bank; he has also worked at the European Central Bank and been secretary to the Swedish Prime Minister in the Commission on the Future Challenges of Sweden. He is frequently invited to give seminars and has been interviewed by the New York Times, The Economist, and the Suddeutsche Zeitung among others. His work is focused on understanding the effects of digitalization and the effects of technology on welfare services. His recent work includes the book Digitalization, Immigration and the Welfare State.