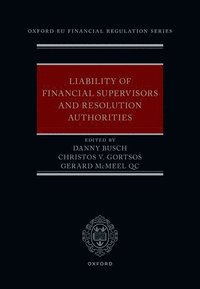 av Danny Busch
Inbunden Engelska, 2022-06-17
2636
Köp
Spara som favorit
This is the first book to focus on the liability regimes which apply to financial supervisors and resolution authorities at the EU level, at the level of major individual EU Member States, and in major jurisdictions worldwide.
Visa hela texten

Danny Busch is the Financial Law Chair, Professor of Law, and the founding Director of the Financial Law Centre (FLC) at Radboud University of Nijmegen. He is a Research Fellow of Harris Manchester College and a Fellow of the Commercial Law Centre, University of Oxford. He is also Visiting Professor at Universita Cattolica del Sacro Cuore di Milano and Universite de Nice Cote d'Azur. He is a member of the Dutch Appeals Committee of the Financial Services Complaints Tribunal (KiFiD). After having graduated with highest honours in Dutch law from Utrecht University in 1997, he was awarded the degree of Magister Juris in European and Comparative Law by the University of Oxford (St John's College) in 1998. Christos Gortsos is Professor of Public Economic Law and Academic Head of the LLM Program in Financial Regulation at the Law School of the National and Kapodistrian University of Athens. He is President of the Academic Board of the European Banking Institute (EBI); Vice-President of the Board of Appeal of the European Supervisory Authority (ESA) a member of the expert group of the European Parliament on banking resolution; visiting Professor at the Europa-Institut of the University of Saarland; research Partner at the University Research Priority Program (URPP) Financial Market Regulation at the University of Zurich; and Member and Academic Coordinator of the Committee on International Monetary Law of the International Law Association (MOCOMILA). Gerard McMeel QC is Professor of Commercial Law and Director of the Centre for Commercial Law and Financial Regulation at the University of Reading. He is also a Barrister of England and Wales and was appointed Queen's Counsel in March 2020. He is an associate member of Quadrant Chambers in London.