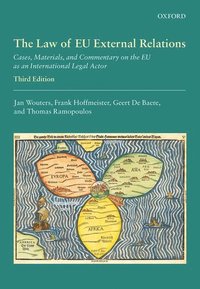 The Law of EU External Relations

Cases, Materials, and Commentary on the EU as an International Legal Actor

Jan Wouters is Full Professor of International Law and International Organizations, Jean Monnet Chair ad personam European Union and Global Governance, Director of the Institute for International Law and of the Leuven Centre for Global Governance Studies (a Jean Monnet Centre of Excellence and University Centre of Excellence) at KU Leuven, and President of the University's Board for International Policy. He is Adjunct Professor at Columbia University and Visiting Professor at Sciences Po (Paris), LUISS (Rome) and the College of Europe (Bruges). A Member of the Belgian Royal Academy and Of Counsel at Linklaters, Brussels, he has published on international and EU law, international organizations and global governance, and corporate and financial law. He is Coordinator of a large Horizon 2020 Project, RECONNECT (Reconnecting Europe with its Citizens through Democracy and Rule of Law). In 2020 he is Visiting Professor at Universite Paris2, Paris, and at Queen Mary University, London. Frank Hoffmeister is Head of Unit at the European Commission's DG Trade and Professor of International Economic Law at the Institute for European Studies at the Vrije Universiteit Brussels. He received a PhD. at the Max Planck Institute for Foreign Public Law and International Law (1998) and served as University Assistant at the Walter Hallstein-Institute for European Constitutional Law at the Humboldt-University in Berlin (1999-2011). Member of Commission Legal Service (2002-09) and former Deputy Head of Cabinet of EU Trade Commissioner De Gucht (2010-15). As of 2015 he is Head of Unit dealing with anti-dumping at DG Trade. Frank has published numerous articles on European and international law topics, has regularly taught EU external relations at a post-graduate program at the University of Seville (2010-16) and teaches EU trade policy at an executive master program at the University of Geneva as an invited lecturer since 2018. Geert De Baere is a Judge at the General Court of the EU and Associate Professor of European Union Law and International Law at the Institute for European Law and the Leuven Centre for Global Governance Studies, KU Leuven. He studied law at the University of Antwerp (Cand. Iuris, 1999 and Lic. Iuris, 2002) and at King's College, Cambridge (LL.M, 2003 and PhD, 2007). In 2005, he was a visiting research fellow at Columbia Law School's European Legal Studies Center, New York City. From 2007 to 2009, he was Legal Secretary in the cabinet of Advocate General Sharpston at the Court of Justice of the EU, while being a postdoctoral research associate at the University of Antwerp. From 2016 to 2017, he was Legal Secretary in the cabinet of Judge Prechal at the Court of Justice of the EU. Thomas Ramopoulos is a Member of the Legal Service of the European Commission (CFSP and External Relations team). He studied law (Hons) at Aristotle University of Thessaloniki and further completed a Master of Philosophy in International Relations at the University of Cambridge. Since May 2011 he has been a fellow of the Leuven Centre for Global Governance Studies at KU Leuven. Thomas teaches as a visiting lecturer and has published extensively on EU external relations law.

1: Personality and Powers of the EU 2: International Representation of the EU 3: Treaty-Making Procedures 4: Mixed Agreements 5: The EU in Other International Organizations 6: EU Sanctions 7: Common Commercial Policy 8: Cooperation Policies Beyond Trade 9: External Environmental Policy 10: Common Foreign and Security Policy 11: The Status of International Law in the EU 12: International Agreements of the Member States