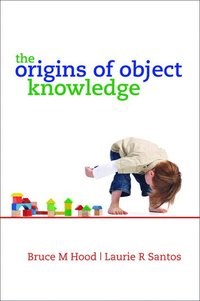 The Origins of Object Knowledge

av Bruce M Hood
Häftad Engelska, 2009-03-19
849
Köp
Spara som favorit
'The Origins of Object Knowledge' presents the most up-to-date research into how the developing human mind understands the world of objects and their properties. It presents some of the best findings from leading research groups in the field of object representation from the perspective of developmental and comparative psychology.
Visa hela texten

<br>Bruce Hood is the Director of the Bristol Cognitive Development Centre in the Experimental Psychology Department at the University of Bristol. He hs been a research fellow at Cambridge University and University College London, a visiting scientist at MIT and a faculty professor at Harvard. He was awarded an Alfred Sloan Fellowship in neuroscience, the Young Investigator Award from the International Society of Infancy Researchers, the Robert Fantz memorial award and voted to Fellowship status by the Society of American Psychological Science in 2006. Laurie Santos is currently the Director of the Comparative Cognition Laboratory in the Department of Psychology at Yale University. She received her B.A. and Ph.D. from Harvard University. She was voted on the "Brilliant 10" Young Scientists by Popular Science Magazine and received the Stanton Prize from the Society for Philosophy and Psychology.<br>

1. Object representation as a central issue in cognitive science; 2. Beyond 'what' and 'how many': Capacity, complexity and resolution of infants' object representations; 3. A comparative approach to understanding human numerical cognition; 4. Multiple object tracking in infants': four (or so) ways of being discrete; 5. Do the same principles constrain persisting object representation in infant cognition and adult perception? The cases of continuity and cohesion; 6. Spatiotemporal priority as a fundamental principle of object persistence; 7. Infants' representations of material entities; 8. The developmental origins of animal and artefact concepts; 9. Building object knowledge from perceptual input; 10. Modeling the origins of object knowledge; 11. Induction, overhypotheses, and the shape bias: some arguments and evidence for rational constructivism; 12. Young infants' expectations about self-propelled objects; 13. Clever eyes and stupid hands: current thoughts on why dissociations of apparent knowledge occur on solidity tasks