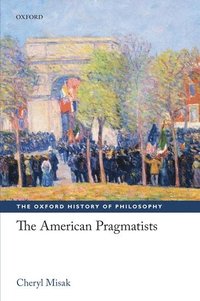 Tim Button, The Times Literary Supplement In casting Peirce and Lewis as the heroes of American Pragmatism, with James and Dewey as the villains, Misak establishes an impressive continuity between pragmatism and both logical empiricism and contemporary analytic philosophy... Indeed, the main arc that Cheryl Misak traces - from Kant, through Peirce and Lewis, and then on to W. V. Quine and into wider philosophical orthodoxy - deserves to become widely known.


S.E. Forschler, CHOICE This book deserves to become a new standard for understanding the history of philosophical pragmatism; no other work covers such a diverse range of essential pragmatists together in such a short space, accurately and thoughtfully placing them in context with one another and with tradition as a whole ... Essential.

<br>Cheryl Misak is Professor of Philosophy, as well as Vice-President and Provost at the University of Toronto. She received a BA from the University of Lethbridge, an MA from Columbia University, and a DPhil from the University of Oxford. She works on American pragmatism, the theory of truth, moral and political philosophy, and the philosophy of medicine. She has published and edited books with Oxford University Press, Routledge, and Cambridge University Press, and has published over forty scholarly articles. In 2008, her 'Experience, Narrative, and Ethical Deliberation' was declared one of the ten best papers in philosophy by The Philosopher's Annual. She is a Fellow of the Royal Society of Canada and has been a Humboldt Fellow at the Goethe University in Frankfurt, a Visiting Fellow of St. John's College Cambridge, and a Rhodes Scholar.<br>