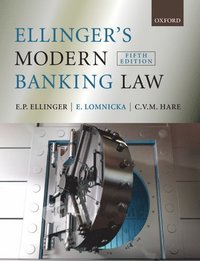 av E P Ellinger
Häftad Engelska, 2011-07-21
609
Köp
Spara som favorit
This book looks at the UK banking in the context of general legal doctrines and banking regulation. It draws on Australian, US and Canadian examples and deals with the impact of the recent global financial crisis.
Visa hela texten

<br>Peter Ellinger is a Professor Emeritus of the National University of Singapore. Previously, he held chairs of law at the Victoria University of Wellington (NZ) and at Monash University, Melbourne, Australia. Professor Ellinger has specialized in commercial law with particular emphasis on banking law and has published a number of books on the subject as well as chapters in Benjamin's Sale of Goods, Chitty on Contracts and the recently published chapter on Negotiable Instruments in Vo. IX of the Encyclopedia of Comparative Law.<br> Eva Lomnicka is Professor of Law at King's College London and a practicing barrister at Four New Square Chambers. She is co-editor of Sweet and Maxwell's Encyclopedia of Consumer Credit and Encyclopedia of Financial Services Law and advises on regulatory issues arising under credit and hire agreements. She was on the DTI's Consumer Credit Steering Group which led to the Consumer Credit Act 2006 and was an expert on the UK's delegation to UNCITRAL's Convention on Receivables Financing (Vienna and New York: 1997-2001). <br>Christopher Hare is a senior lecturer in law at the University of Auckland, teaching and researching in the areas of contract, commercial, and banking law, and international sales and finance. Prior to his departure for New Zealand he practiced as a barrister at 3 Verulam Buildings, Gray's Inn and was a fellow of Jesus College, Cambridge. He is currently editor of the New Zealand Law Review and is the New Zealand correspondent for the Banking and Financial Law Review.<br>

PART I BANKS AND BANKING BUSINESS; 1. The Structure of the British Banking World; 2. The Control of Banking Activities in the United Kingdom; 3. Legal Definition and Privileges of Banks; 4. Money Laundering and the Financing of Terrorism; 5. The Bank and its Customers; PART II THE BANK AS MONETARY AGENCY IN DOMESTIC TRANSACTIONS; 6. The Bank's Role as a Depository; 7. The Current Account; 8. Special Types of Account; 9. Interest-bearing Accounts; 10. The Bank as Paymaster: Negotiable Instruments (including cheques); 11. The Paying Bank; 12. Recovery of Money Paid by Mistake; 13. The Giro System and Electronic Transfer of Funds; 14. Payment Cards; 15. The Bank's Role in Collecting Cheques; 16. Incidental Services Performed by Banks; PART III THE BANK AS FINANCIER AND LENDER IN DOMESTIC TRANSACTIONS; 17. Current Account Financing and Loans; 18. Securities for Bankers' Advances: The General Part; 19. Proprietary Securities; 20. Possessory Securities; 21. Choses in Action as Security; 22. Guarantees