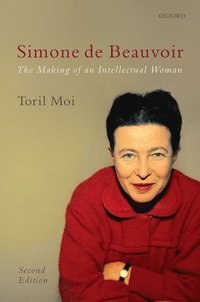 The Making of an Intellectual Woman


Ursula Tidd, THES Moi's brilliant analysis of her subject is de Beauvoir criticism at its very best, demonstrating that the richly stimulating text of Simone de Beauvoir deserves to be widely and well read.

<br>Toril Moi was born and raised in Norway, and worked in England in the 1980s, before moving to Duke University in 1989, where she is now the James B. Duke Professor of Literature and Romance Studies. She is the author of numerous influential books on feminist theory. Her study of Ibsen, Henrik Ibsenand the Birth of Modernism was published to wide critical acclaim in 2006.<br>

Introduction to the Second Edition; Introduction; PART I; 1. Second Only to Sartre; 2. The Making of an Intellectual Woman; 3. Politics and the Intellectual Woman: Cliches and Commonplaces in the Reception of Simone de Beauvoir; PART II; 4. L'Invitee: An Existentialist Melodrama; 5. Freedom and Flirtation: The Personal and the Philosophical in Sartre and Beauvoir; 6. Ambiguous Women: Alienation and the Body in The Second Sex; 7. Beauvoir's Utopia: The Politics of The Second Sex; PART III; 8. The Scandal of Loneliness and Separation: The Writing of Depression; Afterword; Notes; Works Cited