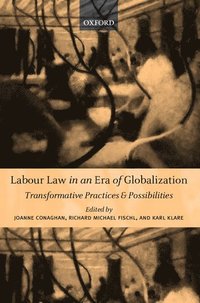 Labour Law in an Era of Globalization

These essays - which are the product of a transnational comparative dialogue among academics and practitioners in labour law and related legal fields, including social security, immigration, trade, and development - identify, analyze, and respond to some of the conceptual and policy challenges posed by globalization.
Visa hela texten

Adelaide Law Review Labour Law in an Era of Globalization presents an incredibly diverse range of arguments regarding the future of the law of work. All these are grounded in the practices of many jurisdictions around the world and the contributors individually imagine a wide range of possibilities for the future development of the law. It is a collection which should be read by everyone who has an interest in the promotion of justice in work relations and the strength of its
content has the capacity not only to contribute to but to be highly influential in those political contests through which the law and the world of work is created.


Adelaide Law Review ... provocative, challenging and always stimulating. As it gathers together some of the very best labour lawyers in the world, the quality of the scholarship and writing is, unsurprisingly, of the highest standard across all contributions.


Adelaide Law Review ... insights into the impacts of globalisation on law and work in contexts as diverse as Great Britain, Japan, Mexico, South Africa, Jordan, Israel and Silicon Valley in the USA.


Modern Law Review [a] valuable book which is worthy of a place on any labour lawyers bookshelf.

Bloggat om Labour Law in an Era of Globalization