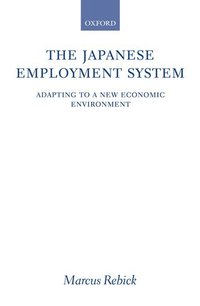 Adapting to a New Economic Environment

av Marcus Rebick
Inbunden Engelska, 2005-06-01
1629
Köp
Spara som favorit
Finns även som
Visa alla 1 format & utgåvor
This book is a study of the Japanese employment system and how it is changing in response to the economic slowdown of the last decade and the ageing of the Japanese population. It focusses on the growth of atypical employment relations and the greater individualization of labour-management relations. The labour markets for women, older workers and youth are given special treatment. Issues such as the rise in unemployment, the decline in the family enterprise, rising
inequality, the decline of the labour force, and Japanese immigration policy are also addressed.
Visa hela texten

Journal of Japanese Studies Rebick does a masterful job of drawing on a wide range of published statistics and reports to cover major features of employment relations and their recent changes in Japan."The book is amazingly up-to-date and wide ranging in its coverage".


Social Science Japan Journal Rebick is to be saluted for his magnificent presentation of so many issuesa superb English-language guide on the Japanese labor market. I recommend it to all readers with an interest in Japanese employment issues.

Marcus Rebick is Nissan Lecturer in the Japanese Economy at Oxford University and a fellow of St. Antony's College. He has also taught at the Industrial and Labour Relations School at Cornell University and been a visiting researcher at Tokyo, Nagoya and Gakushuin Universities in Japan as well as several Japanese government institutions. He is a labor economist who has written numerous articles on Japan's labour market and institutions. He received his doctorate in Economics from Harvard in 1990.