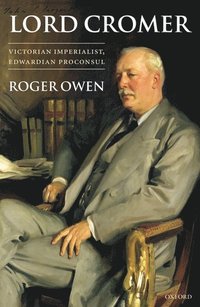 av Roger Owen
Inbunden Engelska, 2004-01-01
1599
Köp
Spara som favorit
In the heyday of Empire just before the First World War, Lord Cromer was second only to Lord Curzon in fame and public esteem. In the days when Cairo and Calcutta represented the twin poles of British power in Asia and Africa, Cromer's commanding presence seemed to radiate the essential spirit of imperial rule. In this first modern biography Roger Owen charts the life of the man revered by the British and hated by today's Egyptians, the real ruler of Egypt for a
quarter of a century.
Visa hela texten

Andrew Lycett, Literary Review Judicious and timely biography ... Owen does not need to apologise for the Proconsul. He successfully explains him and his actions in his subject's own termsmuch as David Gilmour did in his biography of Lord Curzon, and that is praise indeed.


Andrew Lycett, Literary Review Owen presents a man of liberal principles forced, like Tony Blair, to change his approach because of the demands of the job. He is good on the diplomatic connotations of Baring's policies and skilfully integrates the necessary economic detail into his text.


Andrew Roberts, The Sunday Telegraph Owen's fine and scholarly book shows how in fact there was a delightful personality behind the proconsul who always looked as though he was modelling for his own statue.


Philip Mansel, The Spectator This masterly biography, the first modern life of one of the most famous of British imperialists. Roger Owen is the first person to make extensive use of Cromer's notes and the archives in the Foreign office and in the India Office concerning his years of power.