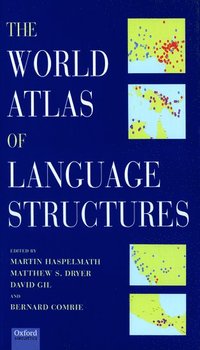 The World Atlas of Language Structures

av Martin Haspelmath
Inbunden Engelska, 2005-07-01
11399
Köp
Spara som favorit
The World Atlas of Language Structures is a book and CD combination displaying the structural properties of the world's languages. Its 142 world maps and numerous regional maps are all in full colour. Each world map shows an average of 400 languages and is accompanied by a fully referenced description. The CD provides an interactive version of the database which allows the user to customize the maps and find and test correlations. The Atlas is an
indispensable source of information for linguists, anthropologists, and geographers. It will be especially valuable for typologists, grammatical theorists, historical linguists, and those interested in a particular region. It sets new standards in comparative linguistics. No institution involved in language research can
afford to be without it.
Visa hela texten

Anna Giacalone Ramet Archivio Glottologico Italiano ...welcomed by linguistics interested in typology...it achieves the goal of providing a representative picture of the diversity of languages.


Mark Donohue, Monash University and National University of Singapore The World Atlas of Language Structures (WALS) is a lot of fun ... Addictively much fun ... To say that WALS significantly increases the degreee to which linguists are exposed to typological mapping is to make a great understatement ... the CD is wonderful ... This is a very real chance to spot correlations between different linguistic features, between linguistic features and areas, and between linguistic features and language families. And, to return to the start of
this review: it's a lot of fun.


Books & Culture I suspect that many linguists will not be able to resist curling up with this massive volume on rainy days just for the fun facts.

<br>Martin Haspelmath is Senior Scientist at the Department of Linguistics of the Max Planck Institute for Evolutionary Anthropology and an Honorary Professor at the University of Leipzig. After studies in Vienna, Cologne, Buffalo, and Moscow, he received his Ph.D. from the Free University of Berlin in 1993. Before moving to Leipzig in 1998, he held teaching positions in Berlin, Bamberg, and Pavia, and he has taught at summer schools in Albuquerque, Mainz, D sseldorf, Cagliari and at MIT. His research interests are in comparative, diachronic, and theoretical morphology and syntax. He is the author of A Grammar of Lezgian (1993), Indefinite Pronouns (1997), and Understanding Morphology (2002) and co-editor of Language Typology and Language Universals: An International Handbook (2 vols, 2001).<br>Matthew S. Dryer received his Ph.D. in Linguistics at the University of Michigan. After ten years at the University of Alberta, he came to the University at Buffalo in 1989 where he is Professor of Linguistics. He has held visiting positions at UCLA, the University of Oregon, the Max Planck Institute for Psycholinguistics in Nijmegen, and the Max Planck Institute for Evolutionary Anthropology in Leipzig. His primary research interest is in typology and syntax. Since 1983 he has been working on a project establishing a large cross-linguistic database on word order and related typological characteristics. His other research interests include discourse, pragmatics, American Indian languages (particularly Kutenai), and Papuan languages. Since 2001 he has been engaged in joint field research with Lea Brown on two languages of Papua New Guinea, Walman (in the Torricelli family) and Poko-Rawo (in the Sko family).<br>David Gil has been a Senior Research Fellow at the Max Planck Institute for Evolutionary Anthropology since 1998. He graduated from UCLA in 1984 and held positions at the University of Washington, the University of Tel Aviv, the University of Haifa, the National University of Singapore, and Universiti Kebangsaan Malaysia (Kuala Lumpur). His interests are in syntactic, semantic, and phonological typology, as well as Malay/Indonesian and other Southeast Asian languages. He is the head of the Jakarta Field Station of the Max Planck Institute, and has more recently also worked on language acquisition and the relation between language structure and thought.<br>Bernard Comrie is Director of the Department of Linguistics at the Max Planck Institute for Evolutionary Anthropology, Leipzig, and Distinguished Professor of Linguistics at the University of California Santa Barbara. His main interests are language universals and typology, historical linguistics (including in particular the use of linguistic evidence to reconstruct aspects of prehistory), linguistic fieldwork, and languages of the Caucasus. Publications include Aspect (1976), Language Universals and Linguistic Typology (1981, 2nd edn 1989), The Languages of the Soviet Union (1981), Tense (1985), The Russian Language in the Twentieth Century (with Gerald Stone and Maria Polinsky, 1996). He is also editor of The World's Major Languages (1987), co-editor (with Greville Corbett) of The Slavonic Languages (1993), and managing editor of the journal Studies in Language.<br>