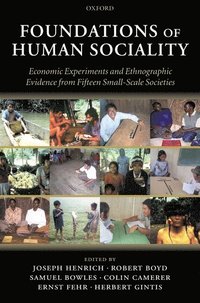 av Joseph Henrich
Inbunden Engelska, 2004-04-01
2009
Köp
Spara som favorit
Skickas inom 10-15 vardagar.
Fri frakt inom Sverige för privatpersoner.
Finns även som
Visa alla 2 format & utgåvor
What motives underlie the ways humans interact socially? Are these the same for all societies? Are these part of our nature, or influenced by our environments? Over the last decade, research in experimental economics has emphatically falsified the textbook representation of Homo economicus. Hundreds of experiments suggest that people care not only about their own material payoffs, but also about such things as fairness, equity, and reciprocity. However, this research
left fundamental questions unanswered: Are such social preferences stable components of human nature, or are they modulated by economic, social, and cultural environments? Until now, experimental research could not address this question because virtually all subjects had been university students.
Combining ethnographic and experimental approaches to fill this gap, this book breaks new ground in reporting the results of a large cross-cultural study aimed at determining the sources of social (non-selfish) preferences that underlie the diversity of human sociality. In this study, the same experiments carried out with university students were performed in fifteen small-scale societies exhibiting a wide variety of social, economic, and cultural conditions. The results show that the variation
in behaviour is far greater than previously thought, and that the differences between societies in market integration and the importance of cooperation explain a substantial portion of this variation, which individual-level economic and demographic variables could not. The results also trace the
extent to which experimental play mirrors patterns of interaction found in everyday life. The book includes a succinct but substantive introduction to the use of game theory as an analytical tool, and to its use in the social sciences for the rigorous testing of hypotheses about fundamental aspects of social behaviour outside artificially constructed laboratories. The editors also summarize the results of the fifteen case studies in a suggestive chapter about the scope of the
project.
Visa hela texten

<br>Joseph Henrich is Assistant Professor in the Department of Anthropology at Emory University. As a theorist, experimentalist and ethnographer, Henrich's work spans Anthropology, Biology, and Economics, and he has published in the leading journals in all three fields. As a field worker, he has conducted research in Peru (Amazonia), Chile, the US, and Fiji. Samuel Bowles is Professor in the Faculty of Economics at the University of Siena, and Professor Emeritus of Economics at the University of Massachusetts, Amherst. He has also been Professor of Economics at Harvard. He is Director of the Economics Program at the Santa Fe Institute, and Co-Coordinator of its Research Program in Culture and Evolutionary Dynamics. Robert Boyd is Professor of Anthropology at UCLA. He has also been Assistant Professor at Emory University and Duke University. He is a member of the editorial board of Quantitative Anthropology, Associate Editor for Evolution and Human Behaviour, and Co-director of the McArthur Foundation Preferences Project. He has published numerous articles and has co-authored two books on human evolution. Colin Camerer is the Axline Professor of Business Economics at Caltech (in Pasadena, California), where he teaches both psychology and economics. He worked at Kellogg, Wharton, and Chicago business schools before Caltech. He is the co-author or editor of three books, and the author of Behavioral Game Theory (Princeton, 2003). Camerer was the first behavioral economist to become a Fellow of the Econometric Society, in 1999, and was the president of the Economic Science Association from 2001 to 2003. Ernst Fehr is Professor of Economics and Director of the Institute for Empirical Research in Economics at the University of Z rich. He is also Director of the Ludwig Boltzmann Institute for the Analysis of Economic Growth, and a Fellow of CEPR and CESifo. In September 1999 he was awarded the prestigious Gossen prize of the German Economic Association (Verein f r Socialpolitik). Herbert Gintis is a member of the External Faculty of the Santa Fe Institute, Professor Emeritus of Economics at the University of Massachusetts, and Adjunct Professor at the Department of Politics, New York University.<br>

1. Introduction and Guide to the Volume; 2. Overview and Synthesis; 3. Measuring Social Norms and Preferences Using Experimental Games: A Guide for Social Sciences; 4. Coalitional Effects on Reciprocal Fairness in the Ultimatum Game: A Case from the Ecuadorian Amazon; 5. Comparative Experimental Evidence from Machiguenga, Mapuche, Huinca, and American Populations Shows Substantial Variation Among Social Groups in Bargaining and Public Goods Behavior; 6. Dictators and Ultimatums in an Egalitarian Society of Hunter-Gatherers - the Hadza of Tanzania; 7. Does Market Exposure Affect Economic Game Behavior? The Ultimatum Game and the Public Goods Game Among the Tsimane of Bolivia; 8. Market Integration, Reciprocity, and Fairness in Rural Papua New Guinea: Results from a Two-Village Ultimatum Game Experiment; 9. Ultimatum Game with an Ethnicity Manipulation: Results from Khovdiin Bulgan Sum, Mongolia; 10. Kinship, Familiarity, and Trust: An Experimental Investigation; 11. Community Structure, Mobility, and the Strength of Norms in an Africa Society: the Sangu of Tanzania; 12. Market Integration and Fairness: Evidence from Ultimatum, Dictator, and Public Goods Experiments in East Africa; 13. Economic Experiments to Examine Fairness and Cooperation among the Ache Indians of Paraguay; 14. The Ultimatum Game, Fairness, and Cooperation among Big Game Hunters