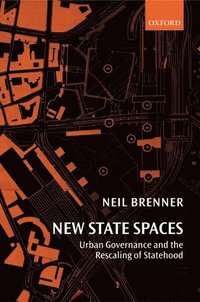 Urban Governance and the Rescaling of Statehood

av Neil Brenner
Inbunden Engelska, 2004-09-01
779
Köp
Spara som favorit
Finns även som
Visa alla 2 format & utgåvor
Neil Brenner has in the past few years made a major impact on the ways in which we understand the changing political geographies of the modern state. Simultaneously analyzing the restructuring of urban governance and the transformation of national states under globalizing capitalism, 'New State Spaces' is a mature and sophisticated analysis of broad interdisciplinary interest, making this a highly significant contribution to the subject.
Visa hela texten

Mark Goodwin - Environment and Planning A This book is a tremendous achievement. It combines a rare theoretical sophistication with informed empirical insight, and it should be read, and read closely, by anyone with an interest in state intervention and restucturing.


Charles Tilly, Joseph L. Buttenwieser Professor of Social Science, Columbia University For a long time, analysts of capitalism laid out their explanations as if space did not matter. Radical geographers, city planners, and students of popular politics then began complaining about the neglect of space, and setting concrete studies of urban change in the context of abstractly framed geographic theories. Neil Brenner takes the whole discussion a step farther, bringing together a knowledgeable critique and synthesis of previous thinking about 'state
spaces,' important new ideas about regional policy under today's capitalism, and deeply documented comparisons of European regions. Students of political processes have much to learn from this book.


Edward W. Soja, Professor of Urban Planning, UCLA School of Public Policy and Social Research Neil Brenner brings together the cutting edges of the new economic and political geographies to produce a creatively transdisciplinary geopolitical economy of the territorial state and the re-scaling of the contemporary world. This is critically spatialized social science at its best: astutely comprehensive in its theoretical scope, pointedly insightful in its assessment of European planning practices, and richly empirical in its argument and analysis. The scales
of accomplishment are enormous.


Saskia Sassen, Author, Losing Control? Sovereignty in an Age of Globalization Brenner brilliantly traces how urban governance has become one of the strategic sites for fundamental transformations of national statehood. The book takes us to analytic zones we did not know existed. Great and original.


Contemporary Sociology, 35.1, January 2006 intellectually rich and challenging. Brenner seamlessly moves between major intellectual traditions, confidently borrowing and recombining arguments and perspectives. The claims are sophisticated and certain to recast debates about the role of cities in the era of globalization.

Preface; 1. Introduction: Cities, States, and the 'Explosion of Spaces'; 2. The Globalization Debates: Opening up to New Spaces?; 3. The State Spatial Process under Capitalism: A Framework for Analysis; 4. Urban Governance and the Nationalization of State Space: Political Geographies of Spatial Keynesianism; 5. Interlocality Competition as a State Project: Urban Locational Policy and the Rescaling of State Space; 6. Alternative Rescaling Strategies and the Future of New State Spaces; Bibliography; Index