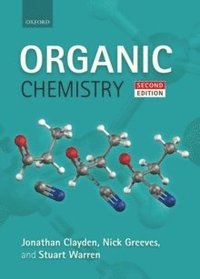 John Hayward, in Chemistry World, December 2012 It is a credit to the authors that a textbook that I have adored for so many years has undergone such a substantial overhaul and yet still retains the features that made it quite so attractive to students in the first place. This is a book that will continue to inspire students of organic chemistry for many years to come. Even if you already have the first edition, I am happy to recommend that you invest in this new version you will not be disappointed.


Adam Nelson, Lecturer, University of Leeds Review from previous edition This is a book we have all been waiting for! It is based on sound mechanistic reasoning and contains thousands of useful examples for teaching. Its style is approachable and covers both fundamental and more advanced material.


Andrew Boa in The Times Higher Education, 2001 Review from previous edition Represents a milestone in the field of organic chemistry textbooks... This is the first organic textbook that could be used in some shape or form on almost every organic chemistry course in any UK undergraduate programme... I soon expect to be hearing "You can look it up in Clayden" ringing from lectures and tutorials, and for many years to come.