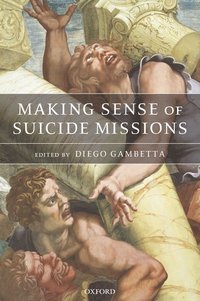 The American Political Science Review ( APSR ) ... demonstrates the relevance of political science to practical concerns...and the way in which certain kinds of "rational choice" explanations have become prevalent in political science.


Political Science Quarterly Among the book's many strengths is the broad wealth of methodologies used to offer insights into the genesis of suicide missions.


Political Science Quarterly The product of this enterprise is a very readable, insightful, and methodologically rigorous volume...the most sophisticated book-length treatment of this burgeoning topic to date.


The Financial Times This is an important book, and the best treatment of the subject I've read...Gambetta brings together a remarkable group of academics from different disciplines and countries who bring a formidable array of research and analysis to their attempt to make sense of suicide missions.


Robert H Bates, Eaton Professor of the Science of Government, Harvard University 'The book effectively balances qualitative, quantitative, and analytic approaches. The case studies are deeply researched, riveting, and compelling. And each is shaped to engage the basic question: Why? To the degree that is possible, the attempts to answer this question are based on rigorous forms of inference and reasoning. The book is therefore a joy to teach from. It should claim the attention of both academics and policy makers.'


The Guardian Making Sense of Suicide Missions is an enlightening collection of essays, so badly needed in the prevalent mood of misconceptions and half-baked analysis.


The Evening Standard This thoughtful and engrossing book underlines the pointlessness of a rage that is truly self-destructive, even if we may have to continue looking warily on the Tube for a while.


New Statesman A stunning essay on al-Qaeda and 11 September 2001 ...challenging and timely book.


Journal of Peace Research This edited volume, with an impressive group of contributing scholars, provides a theoretical framework for the study of suicide terrorism, using a variety of methodological approaches. Great progress is made towards teasing out theoretical issues to explain suicide missions and counterfactual cases in which suicidal violence was absent. The volumes strongest suit is blending political science theory and rigorous methods...possibly the best book published on the
subject.


Lieutenant Colonel Robert Seddon '...of great use in trying to understand some of the psychological motivations that underpin suicide terrorism...It has significantly aided my clarity of understanding of this complex subject.