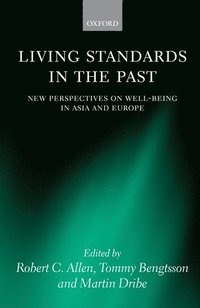 Living Standards in the Past

New Perspectives on Well-Being in Asia and Europe

av Robert C Allen
Inbunden Engelska, 2005-03-01
2819
Köp
Spara som favorit
Skickas inom 10-15 vardagar.
Fri frakt inom Sverige för privatpersoner.
Finns även som
Visa alla 1 format & utgåvor
When did Europe pull ahead of Asia in terms of living standards? A number of well-known scholars compare economic and demographic indicators of well-being in the pre-industrial period. The emerging picture is not one of great differences, but of considerable similarities in standard of living between Europe and Asia before the Industrial Revolution.
Visa hela texten

Continuity and Change If you are interested in human welfare, you will enjoy this book. Accessible in style, ranging broadly over space and time, innovative in method,'living standards in the past' brings together works by some of the foremost practitioners in the field.

<br>Robert Allen is Professor of Economic History at Oxford University and a fellow of Nuffield College. He received his doctorate from Harvard University. He has written extensively on English agricultural history, international competition in the steel industry, the extinction of whales, the global history of wages and prices, and contemporary policies on education. His articles have won the Cole Prize, the Redlich Prize, and the Explorations Prize. His books include Enclosure and the Yeoman: The Agricultural Development of the South Midlands, 1450-1850, which was awarded the Ranki Prize by the Economic History Association, and, most recently, Farm to Factory: A Re-interpretation of the Soviet Industrial Revolution. Professor Allen is a Fellow of the British Academy and the Royal Society of Canada. Tommy Bengtsson, Professor of Demography and Economic History at Lund University, works in both historical and contemporary economic demography. He has served in leading positions in Swedish and international organisations and is currently Chair of the IUSSP Committee on Historical Demography and Series Co-editor of the Eurasian Population and Family History Series. Martin Dribe is Associate Professor of Economic History at Lund University.<br>

Introduction; 1. Standards of living in 18th century China: Regional differences, temporal trends and incomplete evidence; 2. Farm labour productivity in Jiangnan, 1620-1850; 3. Wages, inequality and pre-industrial growth in Japan, 1727-1894; 4. Agriculture, labour, and the standard of living in 18th century India; 5. Real wages in Europe and Asia: A first look at the long-term patterns; 6. Sketching the rise of real inequality in early modern europe; 7. What happened to the standard of living before the industrial revolution? New evidence from the western part of the Netherlands; 8. Economic growth, human capital formation and consumption in western Europe before 1800; 9. Health and nutrition in the pre-industrial era: Insights from a millenium of average heights in northern Europe; 10. The burden of grandeur: Physical and economic well-being of the Russian population in the 18th century; 11. Mental mortality as an indicator of the standard of living in 18th and 19th century Slavonia; 12. The standard of living in Denmark in the 18th and early 19th centuries; 13. Short-term demographic changes in relation to economic fluctuations: The case of Tuscany during pre-transitional period; 14. New evidence on the standard of living in Sweden during the 18th and 19th centuries: Long-term development of the demographic response to short-term economic stress; 15. Individuals and communities facing economic stress: A comparison of two rural areas in 19th century Belgium; 16. Living standards in Liaoing, 1749-1909: Evidence from demographic outcomes; 17. Demographic responses to short-term economic stress in the 18th and 19th century rural Japan: Evidence from two northeastern villages