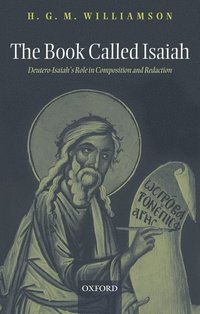 Deutero-Isaiah's Role in Composition and Redaction

av H G M Williamson
Häftad Engelska, 2005-02-01
539
Köp
Spara som favorit
Skickas inom 10-15 vardagar.
Fri frakt inom Sverige för privatpersoner.
Finns även som
Visa alla 1 format & utgåvor
A highly original, major contribution to one of the most important and hotly contested issues concerning the book of Isaiah: who wrote it. The author's provocative and important conclusions point to the key role from beginning to end of the so-called `Deutero-Isaiah', hitherto believed to have been merely the author of chapters 40-55. Professor Williamson's book, based upon a more rigorous methodology than ever used before, sheds much new light on many passages of
Isaiah, and has had significant influence on future work on the subject.
Visa hela texten

Reviews in Religion and Theology Review from previous edition In this carefully argued monograph Williamson presents a fascinating theory and comes to daring conclusions ... He proceeds by a careful analysis of relevant texts and by detailed attention to the work of his scholarly predecessors to produce a work that is clear, convincing and challenging. It marks an important contribution to work on the book of Isaiah ... This is the kind of study that keeps one gripped by the argument and
fascinated to see in which direction the author will move next; a rare treat in modern biblical studies.

Journal of Theological Studies Very positive and forward-looking study ... there is a very clear statement of the problems here, a well argued and fair assessment of the methods and resources with which they need to be dealt with, and a positive attempt to mark out some useful steps forward. It will perform a great service if it draws fresh attention to the undoubted fact the the basic structure of the book of Isaiah poses many still unresolved questions.

A. Gelston, Journal of Semitic Studies This monograph is a major contribution to the study of the composition of the Book of Isaiah, and will necessitate a reorientation of critical perspectives whether its thesis is accepted or rejected. It is written in a lucid and elegant style, and the necessary discussion of text-critical problems in a number of passages is conveniently relegated to an appendix. The scholarly world is deeply indebted to Williamson for such a stimulating contribution to an important
debate.

Journal of Biblical Literature Williamson's economical hypothesis has the strength of its simplicity ... Much remains uncertain, but one of the admirable qualities of the work under review is its frank admission of the fact.