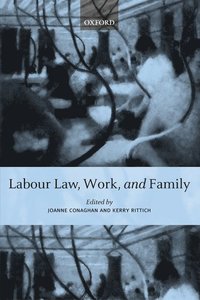 av Joanne Conaghan
Inbunden Engelska, 2005-10-01
1389
Köp
Spara som favorit
Skickas inom 10-15 vardagar.
Fri frakt inom Sverige för privatpersoner.
The book focuses on the relationship between work and family in the context of debate about labour law and regulation. It considers not just the position of women workers (paid and unpaid) or the current preoccupation of states with developing more family-friendly workplaces but it looks at these issues within the broader context of changes taking place in the world of work as a consequence of globalization.
Visa hela texten

Feminist Legal Studies This important and timely collection offers a rigorous interrogation of many of the assumptions behind this new policy agenda...a challenging and thoughtful critique of the 'work/life balance' debate


Feminist Legal Studies ..an excellent account of the ongoing debate over the role of law in structuring the labour market and policing the boundaries between work and family. It offers a significant and very welcome addition to scholarship

Joanne Conaghan studied law at Oxford. She is currently a Professor of Law at the University of Kent at Canterbury, having previously taught at the Universities of Exeter in Devon and San Diego in California. Her areas of research include labour law, tort, and feminist legal theory, and she has published widely in all three fields. She has been Managing Editor of the international journal, Feminist Legal Studies, since 1998. She is a member of the Co-ordinating Committee of the International Network on Transformative Employment and Labour Law (INTELL) and co-editor (with Michael Fischl and Karl Klare) of Labour Law in an Era of Globalization (OUP, 2002).

1. Introduction: Interrogating the Work/Family Divide; I SITUATING DEBATE ABOUT WORK AND FAMILY; 2. Work, Family, and the Discipline of Labour Law; 3. Equity and Efficiency: International Institutions and the Work/Family Nexus; II REIMAGINING THE WORKER; 4. Work/Family, Australian Labour Law, and the Normative Worker; 5. The Right to Flexibility; 6. ReCommodifying Time: Working Hours of 'Live-in' Domestic Workers; 7. The Family Economy versus the Labour Market (or Housework as a Legal Issue); 8. Gender and Diversification of Labour Forms in Japan; 9. Poor Women's Work Experiences: Gaps in the 'Work/Family' Discussion; III 'FAMILY-FRIENDLY' LABOUR LAW; 10. Work, Family, and Parenthood: The European Union Agenda; 11. Taking Leave: Work and Family in Australian Law and Policy; 12. A New Gender Contract? Work/Life Balance and Working-Time Flexibility; 13. Work and Family Issues in the Transitional Countries of Central and Eastern Europe: The Case of Hungary; 14. Issues of Work and Family in Japan; IV CONCLUSION: A CAUTIONARY TALE; 15. A Woman's World