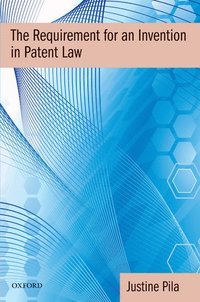 The Requirement for an Invention in Patent Law

av Justine Pila
Inbunden Engelska, 2010-03-18
1489
Köp
Spara som favorit
Skickas inom 10-15 vardagar.
Fri frakt inom Sverige för privatpersoner.
This book provides a critical analysis of legal conceptions of the invention in UK patent law and under the European Patent Convention. A central theme of the book is that the requirement for an invention, properly construed, sets the boundaries of the patent system in two ways. The first is by defining the categories of subject matter capable of supporting a patent, and the second is by restricting the protection conferred by a patent to individual subject matter
conceived qua invention.
Visa hela texten

www.ip-brands.com/blog Her analysis is accompanied by concise and digestible case notes, and her commentary provides a compelling narrative that ties the work together without being repetitive. a though provoking and informative book to suit anyone with a legal background and a strong interest in how and why contemporary society protects ideas

Bloggat om The Requirement for an Invention in Paten...