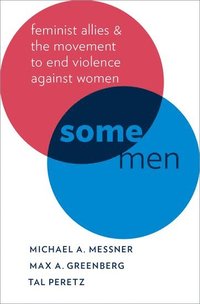 Feminist Allies in the Movement to End Violence against Women

av Michael A Messner
Häftad Engelska, 2015-04-02
379
Köp
Spara som favorit
Finns även som
Visa alla 1 format & utgåvor
What does it mean for men to join with women in preventing sexual assault and domestic violence? This book, based on life history interviews with men and women anti-violence activists, illuminates both the promise of men's violence prevention work, as well as the strains and tensions that inhere, both for men as feminist allies, and for the women they work with.
Visa hela texten

Gloria Steinem In the last four decades or so, there has grown up a diverse activist community of men who understand that feminism is their movement, too - not only because they support daughters, wives, mothers and co-workers, but because they see violence against females as a normalization of all violence, and a powerful way of limiting men's full humanity, too. If you want to meet them, learn more and hope more, you'll find them in the pages of Some Men, a practical,
readable, inspiring guide to a crucial, growing, yet rarely reported American movement.


Raewyn Connell, Author of Masculinities and Confronting Equality Some Men is a splendid book. Authors Messner, Greenberg and Peretz combine moving narrative, careful research, and sharp analysis. Their book tells in depth the story of those American men who have worked to end rape, domestic violence, and other forms of men's violence against women. Tracing the complex relations with changing feminism, and the intense debates, failures and successes of three generations of activist men, this is vividly-written contemporary
history from which everyone concerned with gender justice can learn.


Rob Okun, Editor of the anthology, VOICE MALE: The Untold Story of the Profeminist Men's Movement For more than 40 years, a growing tribe of males has been making an exodus from the desert of conventional manhood. The remarkable journeys of a number of them are recounted in this inspiring chronicle of the profeminist men's movement. Some Men is sure to stir the hearts of anyone championing a world where men denounce violence against women and advocate for the liberation of men.


Verta Taylor, Professor Sociology and Feminist Studies, University of California Santa Barbara In this moving book, the authors provide insight into the hearts and minds of men who took seriously the feminist call by making lifetime commitments as allies in the movement to end violence against women. A stellar book that is carefully grounded in the history of the feminist and anti-violence movements, it is a must-read not only for students and scholars of gender, masculinity, feminism, and the anti-violence movement, but also for policy-makers and activists
working toward ending gender-based violence.