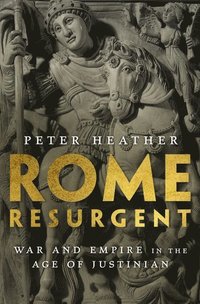 War and Empire in the Age of Justinian

av Peter Heather
Inbunden Engelska, 2018-06-28
299
Köp
Spara som favorit
Skickas inom 5-8 vardagar.
Fri frakt inom Sverige för privatpersoner.
Finns även som
Visa alla 3 format & utgåvor
Between the fall of the western Roman Empire in the fifth century and the collapse of the east in the face of the Arab invasions in the seventh, the remarkable era of the Emperor Justinian (527-568) dominated the Mediterranean region. Famous for his conquests in Italy and North Africa, and for the creation of spectacular monuments such as the Hagia Sophia, his reign was also marked by global religious conflict within the Christian world and an outbreak of plague that
some have compared to the Black Death. For many historians, Justinian is far more than an anomaly of Byzantine ambition between the eras of Attila and Muhammad; he is the causal link that binds together the two moments of Roman imperial collapse. Determined to reverse the losses Rome suffered in the
fifth century, Justinian unleashed an aggressive campaign in the face of tremendous adversity, not least the plague. This book offers a fundamentally new interpretation of his conquest policy and its overall strategic effect, which has often been seen as imperial overreach, making the regime vulnerable to the Islamic takeover of its richest territories in the seventh century and thus transforming the great Roman Empire of Late Antiquity into its pale shadow of the Middle Ages.

In Rome Resurgent, historian Peter Heather draws heavily upon contemporary sources, including the writings of Procopius, the principal historian of the time, while also recasting that author's narrative by bringing together new perspectives based on a wide array of additional source material. A huge body of archaeological evidence has become available for the sixth century, providing entirely new means of understanding the overall effects of Justinian's war policies. Building on his
own distinguished work on the Vandals, Goths, and Persians, Heather also gives much fuller coverage to Rome's enemies than Procopius ever did. A briskly paced narrative by a master historian, Rome Resurgent promises to introduce readers to this captivating and unjustly overlooked chapter in ancient
warfare.
Visa hela texten

Adrian Spooner, Classics for All Rome Resurgent is utterly brilliant.


Simon Sebag Montefiore, BBC History magazine The analysis here is really penetrating, and the research is new. Heather weaves a brilliant narrative of the Emperor Justinian's rule in the sixth century, looking at the wars and adventures that led him to conquer much of the Mediterranean for Byzantium. It's an amazing read - everyone should go and search it out.


John Haldon, The American Historical Review This is a well-written, lucid, and persuasive general history of the reign of Justinian and the broader context within which it should be understood, one that offers an up-to-date account of a crucial moment in the history of the Mediterranean and Middle East and should certainly replace some of the older popular literature on Justinian and his reign.


CHOICE Heather provides general readers a clear and thorough narration of Justinians wars and historians with food for thought concerning their impact ... Recommended


The Washington Independent If you are interested in this period, you will find many appealing narrative streams here... Rome Resurgent is singularly rich in detail, as well as in informed insight into a period balanced on the cusp of the empires transformation from Roman to Byzantine.


Peter Brown, author of Ransom of the Soul and Through the Eye of a Needle This book does full justice to 'the extraordinary historical phenomenon which is Justinian.' It combines a refreshingly sane view of the sixth-century East Roman Empire which Justinian came to rule, of the western world on which he impinged in a series of memorable military adventures, and of the overall significance of his achievements. Written with a sharp sense of the unpredictable in war and politics, it catches, as few other books have done, the breathtaking
quality of the reign of the last truly great emperor of Rome.


Peter Frankopan, author of The Silk Roads and The First Crusade
A magisterial account of the recovery of Rome after the collapse of the western provinces. Peter Heather sets out how stability and prosperity returned to the Roman East and paved the way for a new golden age. This is not just an interesting book but an important one too.


Anthony Kaldellis, author of Streams of Gold, Rivers of Blood and A Cabinet of Byzantine Curiosities
Not since the days of Julius Caesar had the Romans conquered so much territory as they did under Justinian or rather reconquered it. Bracketed between the fall of the western empire in the fifth century and the fall of the Roman Near East in the seventh, the empire of New Rome came out swinging on all fronts. Heather brings clarity and verve to his narrative, but also explains the overall strategic calculations that are often missing from other accounts.
Rome Resurgent is now the modern military history of the reign.

Peter Heather is Professor of Medieval History at King's College London, and author of The Fall of the Roman Empire, Empires and Barbarians, and The Restoration of Rome.