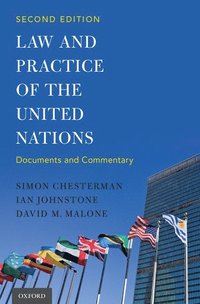 Law and Practice of the United Nations

This book is overdue and immensely valuable. The United Nations used to merit a couple of chapters in an often dry-as-dust casebook on international organizations generally, chapters devoted to the law of the Charter but never the political practice that illuminates it and makes it both trying and occasionally triumphant. Here, at last, is a volume entirely devoted to the United Nations for scholars of both international law and international relations, in an
accessible format with challenging issues at every turn."-Anne-Marie Slaughter, President and CEO of the New America Foundation


International lawyers everywhere should rejoice that Thomas Franck, along with colleagues Simon Chesterman and David Malone, have at last made widely available the primary documents that have long formed the backbone of Franck's renowned 'UN Law' course. Their casebook - which examines through a legal lens the relevance, capacity, practice, and accountability of the UN - stresses the interaction between law and politics without confusing the two. From its opening
introductory section discussing, among other things, why the UN Charter ought to be regarded as a 'constitution', to its closing chapter devoted to the prospects for UN reform, this is a book that makes immediate and concrete what it means to have an international rule of law."-Jose E. Alvarez, Hamilton
Fish Professor of International Law & Diplomacy, Columbia Law School


Law and Practice of the United Nations is part casebook, part textbook and, throughout, a profound set of reflections on the past, present and future of the UN as a 'constitutional' framework for global governance. It is designed for students, but there is no specialist on the UN who would not learn from this impressive volume." -Michael W. Doyle, Director, Columbia Global Policy Initiative, and University Professor, Columbia University


These three highly respected authors have created a volume from which any serious scholar can gain tremendous insight. ... First, I believe that the inclusion of a broad range of original documentation makes this a much more useful book than has been published anywhere else in recent years. Second, the authors provide in their commentary very rich explanations of the practical contexts within which these documents have arisen; these explanations provide deeper
understandings of the legal and political considerations standing behind the documents. Third, the authors have addressed important topics of very recent vintage, allowing instructors and students to make meaningful evaluations of contemporary public events. These authors have generated such a breath of
fresh air that I must admit that I very much look forward to using the text."-Edwin Smith, Leon Benwell Professor of Law, International Relations and Political Science, University of Southern California


The book's central strength is that it situates its legal analysis in the context of policy and practice. The selection...

Simon Chesterman is Dean and Professor at the National University of Singapore Faculty of Law. He is also Editor of the Asian Journal of International Law and Secretary-General of the Asian Society of International Law. Ian Johnstone is Professor of International Law at the Fletcher School of Law and Diplomacy, Tufts University. He is on the editorial board of Global Governance and International Organizations Law Review. David M. Malone is Rector of the UN University (UNU) in Tokyo and Under-Secretary-General of the UN. He has served as a Canadian ambassador to the UN and as Canada's high commissioner to India, and from 2004 to 2006 oversaw multilateral and economic diplomacy within Canada's Foreign Affairs Department.