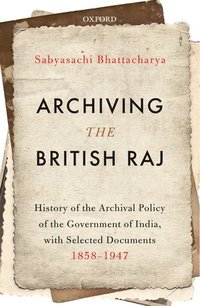 History of the Archival Policy of the Government of India, with Selected Documents, 1858-1947

av Sabyasachi Bhattacharya
Inbunden Engelska, 2018-12-13
467
Köp
Spara som favorit
Finns även som
Visa alla 1 format & utgåvor
Archiving the British Raj analyses the institutional history of modern archival policy in India. It tells us the history of the colonial archive itself through the debates and discussions about its nature, use, and functioning that took place first amongst British officials and scholars and, nearer independence, amongst Indian historians. This account counters an understanding of the archive as a mere repository of documents, and instead lays bare its complex
relationship with the colonial state.
Visa hela texten

Sabyasachi Bhattacharya is Tagore National Fellow, Ministry of Culture, Government of India. He was earlier Vice Chancellor of Visva-Bharati, Santiniketan, and Professor at the Centre for Historical Studies, Jawaharlal Nehru University, New Delhi. He has published several volumes with OUP, India, including The Defining Moments in Bengal, 1920-1947 (2014) and Talking Back: The Idea of Civilization in the Indian Nationalist Discourse (2011). For the former, he was awarded the H.K. Barpujari award at Indian History Congress in December 2017.

Foreword by Pritam Singh Introduction 1. 1858 to 1871: Absence of a Definite Archives Policy 2. Developments Leading to the Creation of a Central Archive: 1872-1891 3. The Imperial Record Department: Objectives and Achievements, 1891-1926 4. Anticipations of Freedom: 1927-1947 Bibliography Index About the Author