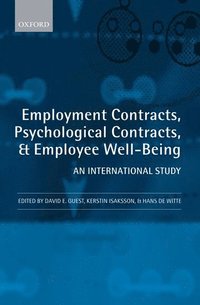 <br>David Guest is Director of the Workforce Programme of the NIHR Patient Safety and Service Quality Research Centre at King's College, London and Director of the King's College Centre for Research in Human Resource Management, Employment Relations and Organizational Behaviour. His research has addressed a range of issues including: the relationship between human resource management, organizational performance and workers' well-being; the role of the psychological contract in employment relations; the scope for and impact of participation and partnership at work; the future of the career. He has published numerous articles, book chapters, and reports. Kerstin Isaksson is a licensed psychologist with a Ph D in psychology from Stockholm University. She worked at the Department of Psychology in Stockholm until 1997 as a researcher. Between 1997 and 2006 she had a position as researcher in the National Institute for Working Life in Stockholm. Her current position since 2006 is professor in psychology at Malardalen University. <br>Professor Isaksson's research has focused on issues such as: unemployment, early retirement, downsizing, and job insecurity. In recent years, temporary employment and the psychological contract have been the focus of her research. She has coordinated several large national and international collaborative projects. She has been the coordinator of the PSYCONES project supported by EU Fifth framework programme since the pilot study in 2002 until the end of the project in 2005. Hans De Witte is a full professor at the Department of Psychology of the Katholieke Universiteit Leuven, Belgium. He teaches Work (and Organizational) Psychology and is member of the Research Group Work, Organizational and Personnel Psychology (WOPP) of his Department. His research includes the study of the psychological consequences of job insecurity, unemployment, temporary employment, and downsizing, as well as mobbing and stress versus engagement at work. He participated in various national and European studies on these topics.<br>