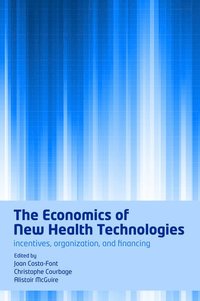 The Economics of New Health Technologies

Dr Joan Costa-Font teaches political economy and European social policy at the London School of Economics and Political Science, and has previously taught Economics at the University of Barcelona. Dr Costa-Font is a fellow of CESifo (Munich), the health econometrics and data group (York), FEDEA (Madrid), IESE Business School and CAEPS (Barcelona). He has received various awards, including the Bayer Health Economics Award in 2003, the Edad &Vida Research award in 2006 and the Rogeli Duacastella Award on Social Science granted by the Foundation "La Caixa" in 2008. He has acted as an economic and research consultant for the Word Bank, the European Commission, the Spanish Ministry of Health and the Catalan Ministry of Trade as well as for private organisations. Christophe Courbage, PhD in Economics, is Director of the Health and Ageing and Insurance Economics research programmes at the Geneva Association. He lectures in Health Economics at the University of Lausanne, and "International Faculty" at the Singapore College of Insurance. Dr Courbage is also Deputy Editor of The Geneva Papers and Executive Secretary of the European Group of Risk and Insurance Economists (EGRIE). Dr Courbage was awarded the 1999 Ernst Meyer Prize by the Geneva Association for the best PhD thesis in Insurance Economics, is Deputy Editor of The Geneva Papers on Risk and Insurance - Issues and Practice, and is Executive Secretary of the European Group of Risk and Insurance Economists (EGRIE). Professor Alistair McGuire [BA (Econ); MLitt (Econ); PhD (Econ)] is a Professor in Health Economics at LSE Health and Social Care. He has been professor of Economic at City University and thought at Oxford and Aberdeen. Professor McGuire has written numerous books, articles and reports in this area. He has also acted as an advisor to numerous UK government offices and research councils (including the ESRC and the MRC), as well as an economic consultant to a number of foreign governments, and domestic and foreign corporations and pharmaceutical companies. His current interests are in economic evaluation (especially when conducted alongside clinical trials), the economics of the hospital, technological diffusion, and health care insurance.

PART I. INTRODUCTION; 1. What do we know about the role of health care technology in driving healthcare expenditure growth?; PART II. INNOVATION, DIFFUSION AND TECHNOLOGY CHANGE; 2. The process of innovation: incentives, behaviour and organization; 3. Technology - scientific force or power force?; 4. Diffusion of health technologies: evidence from the pharmaceutical sector; PART III. TECHNOLOGICAL CHANGE AND HEALTH INSURANCE; 5. Insurance and new health technology; 6. Technological change and health insurance; 7. Health insurance and the uptake of new drugs in the United States; 8. Genetic advances and health insurance; PART IV. INNOVATION, SOCIAL DEMAND AND VALUATION; 9. Ageing and pharmaceutical innovation; 10. New approaches to healthcare innovation: information for chronic patients; 11. The convergence of nano-, bio- and information technologies in healthcare; 12. Treatment uncertainty and irreversibility in medical care: implications for cost-effectiveness analysis; 13. The limits and challenges to the economic evaluation of health technologies; PART V. INCENTIVES, MECHANISMS AND PROCESSES; 14. Intellectual property rights and pharmaceuticals development; 15. Home, or nursing home? The effect of medical innovation on the demand for long-term care; 16. Demand for health information on the internet; 17. Institutional pathways for integrating genetic testing into mainstream healthcare