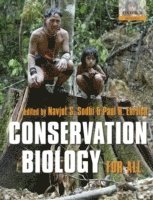 Conservation Biology for All

Ecology If a book could receive a standing ovationthis one is a candidate. Sodhi and Ehrlich have created a comprehensive introduction to conservation biology that is accessible intellectually, and financially, to a broad audienceindeed it is Conservation biology for all.


The book is packed with information, is wide-ranging, and includes most emerging issues that come under the umbrella of conservation biology today.

<br>Navjot S. Sodhi is currently a Professor of Conservation Ecology at the National University of Singapore. He received his Ph.D. from the University of Saskatchewan (Canada). He has been studying the effects of rain forest loss and degradation on Southeast Asian fauna and flora for over 13 years. He has published over 100 scientific papers in international and regional scientific journals such as Nature, Science, Trends in Ecology and Evolution, Annual Review of Ecology, Conservation Biology, Biological Conservation, and Biodiversity and Conservation. He has written/edited several books/monographs such as Tropical Conservation Biology (2007, Blackwell). He has also spent time at Harvard University as a Bullard Fellow (2001-02) and Hrdy Fellow (2008-09) where he now holds an adjunct position. He currently (or has been) is an Associate Editor/Editor of prestigious journals such as Conservation Biology, Biological Conservation, Animal Conservation, the Auk and Biotropica. <br>Paul R. Ehrlich is Bing Professor of Population Studies and professor of biology at Stanford University and a Fellow of the Beijer Institute of Ecological Economics. His research has ranged from the evolution of DDT resistance in fruit flies, the theory of systematics, the dynamics of butterfly populations, and the behaviour of birds and reef fishes to the conservation of mammal populations and human cultural evolution. He is co-founder of the field of coevolution. He is the author or co-author of over 40 books, and some 1000 scientific papers and articles. Ehrlich is a member of the National Academy of Sciences, a fellow of the American Academy of Arts and Sciences and the American Philosophical Society, and past president of the American Institute of Biological Sciences, and a recipient of numerous international honors, including the Crafoord Prize (given by the Royal Swedish Academy as an explicit equivalent of a Nobel in fields where the Nobel is not given) and a MacArthur "genius award."<br>