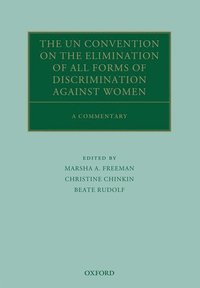 av Marsha A Freeman
Inbunden Engelska, 2012-01-26
2699
Köp
Spara som favorit
Finns även som
Visa alla 3 format & utgåvor
This is the first commentary on the Convention on the Elimination of All Forms of Discrimination Against Women (CEDAW), analyzing the Convention article by article. Each chapter provides an overview of an article's negotiating history, interpretation, and all the relevant case law, including decisions and recommendations by the CEDAW Committee.
Visa hela texten

Julia L. Ernst, Melbourne Journal of International Law A monumental achievement that will undoubtedly prove to be a widely-utilised resource for the continuing international women's human rights movement. It is a model of meticulous research, thoughtful critique and unwavering commitment to social justice.


Lisa R. Pruitt, IntLawGrrls Kudos to all the contributors to this fine resource, as well as to the intrepid editors who brought this behemoth task to fruition. The iCommentaryr will serve human rights scholars and students, gender activists, policy makers, and the wider international law community for decades to come.


Liesbeth Lijnzaad In sum, this Commentary will prove to be an invaluable source of information both on the substantive law in the Womens Convention as well on the procedure for individual complaints. It is an important book containing a wealth of information which is of relevance to academics, practitioners and the NGO community.

<br>Marsha A. Freeman is Director of the International Women's Rights Action Watch and a Senior Fellow at the University of Minnesota Human Rights Center. IWRAW is an international women's human rights resource centre and pioneered the shadow reporting to the Committee on the Elimination of Discrimination against Women. Dr. Freeman is the editor of Assessing the Status of Women, a guide to using the CEDAW Convention, and author of Women's Economic, Cultural and Social Rights, a manual for working with the International Covenant on Economic, Social and Cultural Rights. She teaches at the University of Minnesota Law School. <br>Christine Chinkin has law degrees from the universities of London and Sydney and Yale Law School. She has taught international law in Singapore, Australia and the United States as well as in the United Kingdom. She is a member of Matrix Chambers and the author of many articles on international human rights law, especially relating to women's human rights. She has been a consultant to the United Nations Division for the Advancement of Women and the Office of the High Commissioner for Human Rights. <br>Since 1 January 2010, Prof. Dr. iur. Beate Rudolf is the Director of the German Institute for Human Rights. Prior to that, she was a junior professor for public law and equality law at the faculty of law of Freie Universitat Berlin and director of the research project "Public International Law Standards for Governance in Weak and Failing States" within the Research Center "Governance in Areas of Limited Statehood." Her research focuses on human rights and legal principles on state structures under public international law, European law and German constitutional law as well as from a comparative law perspective.<br>