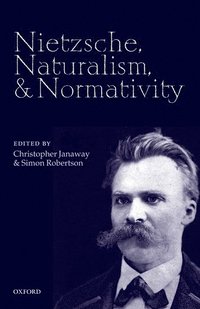 Journal of the History of Philosophy [A]n important contribution, peppered with insightful moments that will reward any reader whose philosophical home is at the busy intersection of normative ethics, metaethics and moral psychology and who hasor who by now should havean interest in the challenge Nietzsche puts to moral philosophy.


Brian Leiter, Notre Dame Philosophical Reviews The volume as a whole is essential for Nietzsche scholars, and some of the essays will interest moral philosophers more generally... an excellent contribution


Matthew Dennis, Journal of Nietzsche Studies this collection is an important and timely contribution to the existing literature that deals with Nietzsches account of normativity, one that will be warmly welcomed by both those who are well versed in the recent scholarship and those who have yet to contribute,


Andrew Huddleston, Mind The past decade has seen a number of high-quality edited volumes published on Nietzsche, and this is no exception. This will be a valuable resource for those writing on these and related topics.

<br>Christopher Janaway is Professor of Philosophy at the University of Southampton, and was formerly Professor of Philosophy at Birkbeck College, University of London. He has written extensively on the philosophy of Nietzsche and Schopenhauer and on aesthetics. He has been principal investigator on the AHRC-funded project 'Nietzsche and Modern Moral Philosophy' at Southampton and is general editor of the Cambridge Edition of the Works of Schopenhauer. His most recently published book is Beyond Selflessness: Reading Nietzsche's Genealogy (2007). <br>Simon Robertson is a Lecturer in Philosophy at Cardiff University. After completing a PhD at the University of St Andrews, he lectured at the Universities of Leeds, Stirling and York, and held a postdoctoral research fellowship as part of the Nietzsche and Modern Moral Philosophy project at the University of Southampton. His main philosophical background lies at the intersection of contemporary metaethics, practical reason and normative ethics, though he also works on the philosophy of normativity, Nietzsche, and the philosophy of risk. He has published extensively in each of these fields, both in journals and edited collections, and is the editor of Spheres of Reason (OUP, 2009).<br>