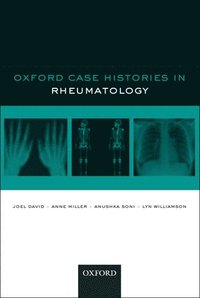 Dr Joel David qualified in 1981 from University of Witwatersrand, South Africa. His post graduation medical experience was gained in London as registrar in medicine at The Royal Free Hospital and later Hammersmith Hospital. In 1992, he took up position as consultant rheumatologist and physician at The Royal Berkshire Hospitals NHS Trust, Reading. He remained there until 2000. He is currently consultant rheumatologist at the Nuffield Orthopaedic Centre in Oxford, UK. Dr Anne Miller qualified in medicine at Birmingham University in 1990. She trained in general practice where she worked until 2001. She worked in Rheumatology in Reading and later Oxford before she took up her position as associate specialist in rheumatology in 2008. She is involved in undergraduate teaching. Her interests include paediatric rheumatology. Dr Anushka Soni is currently the clinical lecturer in rheumatology, University of Oxford, UK. She qualified in Medicine from Cambridge (preclinical) and Oxford (clinical) Universities. During her current post, she has organised the rheumatology teaching and assessments for 5th year Oxford medical students. She has recently been awarded a fellowship from the NIHR to undertake a DPhil in musculoskeletal medicine. Dr Lyn Williamson has been a Consultant Rheumatologist at the Great Western Hospital, Swindon since 2000. She qualified from Oxford University and worked in paediatrics and general practice before taking her higher specialist rheumatology training at Oxford. Her interests include psoriatic arthritis, paediatric rheumatology, acupuncture and medical education. She is currently an honorary clinical lecturer at both Oxford and Bristol University Medical Schools.