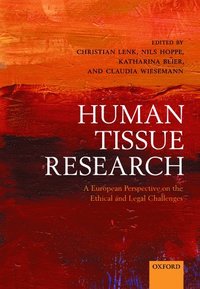 A European perspective on the ethical and legal challenges

PD Dr Christian Lenk read philosophy, political science, and social anthropology at the University of Hamburg, Germany. From 2000 to 2002 he worked in two projects in the field of medical ethics and bioethics at the Universities of Marburg and Munster, financed by the German Research Community (DFG). He received his doctoral degree for a study on the ethical issues of enhancement technologies in biomedicine at the University of Munster in 2002. In 2002 he became a researcher and since 2004 has been assistant professor for medical ethics at the Department for Medical Ethics and History of Medicine at the University of Gottingen. Nils Hoppe read law, with a specialisation in medical law and human rights, in Nottingham, Erlangen-Nuremberg, Goettingen and Hannover. He completed his doctorate in 2008 with a thesis on property rights in the life sciences. Nils held positions as a legal assistant in a large English law firm, legal counsel in a university hospital and as research fellow in medical ethics. He is now a senior research fellow in health law and bioethics at the Center for Philosophy and Ethics of Science (ZEWW) at Leibniz Universitaet Hannover. Katharina Beier majored in political science and German language and literature at the University of Greifswald in North-Eastern Germany. In February 2008 she finished her PhD "Between persistence and revision - The biomedical challenge to political liberalism" (Campus 2009). Since April 2008 she has been working as a research fellow and Project Officer for the Tiss.EU project at the Department of Medical Ethics and History in Gottingen (Germany). Her research interests comprise modern liberal theories, liberal biopolitics, questions of biomedical/genetic justice, utilitarianism as well as ethical and legal aspects of biobanks. Claudia Wiesemann is a medical ethicist and head of the Department of Medical Ethics and History of Medicine at Gottingen University Medical School, Germany. She is also President of the German Academy of Ethics in Medicine, an academic society for Medical Ethics. In 1995, she completed her habilitation in medical history and medical ethics at the University of Erlangen-Nuernberg, Germany. Her dissertation in medical history at Muenster University, Germany, was published in 1991. She has completed all medical exams in Muenster University, Germany, in 1985 and has worked as resident from 1986 to 1988. Claudia Wiesemann has coordinated several European research projects, e.g., on the ethics of tissue research and on information and documentation networks in ethics in medicine and biotechnology. Her research focuses on the ethics of research with humans, reproductive medicine and the family. She serves as an editorial board member of several journals in the field of medical humanities.

Preface: Introduction by the editors; 1 - KEY CONCEPTS OF THE ETHICAL DEBATE; 1. The biomedical uses of the body: lessons from the history of human rights and dignity; 2. Exploring an alternative for informed consent in biobank research; 3. Respect as a precondition for use of human tissue for research purposes; 4. Risky business - re-evaluating participant risk in biobanking; 5. Reciprocity, trust, and public interest in research biobanking: in search for a balance; 6. Taking solidarity seriously: do biobank institutions have a moral obligation to inform their patients on incidental health findings?; 7. Beyond the dichotomy of individualism and solidarity: participation in biobank research in Sweden and Norway; 2 - THE LEGAL REGULATION OF HUMAN TISSUE RESEARCH; 8. Law, ethics, and human tissue research - integration or competition?; 9. Legal paradigms of human tissues; 10. Research with human biological material and personal data in biobanks - legal and regulatory framework in Switzerland; 11. Legal issues surrounding French research-focused biobanks; 12. Biobanks: ethical and legal aspects of the collection and storage of human biological material in Italy; 13. How to achieve 'free movement of tissue' in the EU research area; 3 - PRACTICES - DISCIPLINARY PERSPECTIVES; 14. Ethical recommendations for the use of human biological material stored in pathology archives for research purposes; 15. Informed consent when donating cells for the production of human tissue engineered products; 16. The regulation of autologous stem cells in heart repair: comparing the UK and Germany; 17. Discovering informed consent: a case study on the practice of informed consent to tissue donation in Austria; Epilogue: Conclusions and future prospects from the articles of the present volume by the editors