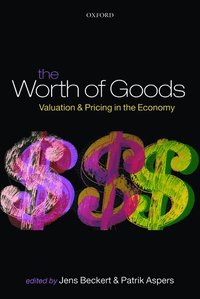 The Worth of Goods

Valuation and Pricing in the Economy

av Jens Beckert
Inbunden Engelska, 2011-06-23
1469
Köp
Spara som favorit
Finns även som
Visa alla 2 format & utgåvor
Drawing on theory and empirical research, this interdisciplinary book brings together leading social scientists to examine how prices are set and how values emerge inside and outside of markets, which have become the central force in the contemporary economy.
Visa hela texten

tienne Nouguez, Revue francaise de sociologie The Worth of Goods provides a useful panorama of research on valuation and offers a series of concepts and empirical cases that bring to light the diversity and complexity of economic value production mechanisms

Jens Beckert is Director of the Max Planck Institute for the Study of Societies in Cologne and Professor of Sociology at the University of Cologne. He has held visiting positions at Princeton University, Harvard University, Cornell University, the European University Institute, and Sciences Po in Paris. The main focus of his research is economic sociology with a special emphasis on markets, organization studies, the sociology of inheritance and social theory. He is the author of Beyond the Market: the Social Foundations of Economic Efficiency (Princeton University Press 2002) and InheritedWealth (Princeton University Press 2008). His articles have been published in journals such as Theory & Society, Sociological Theory, Organization Studies, and the European Journal of Sociology. Patrik Aspers holds a PhD in Sociology from Stockholm University (2001). He has been resident at institutions such as Harvard University, Columbia University, the London School of Economics, and the Max Planck Institute for the Study of Societies in Cologne. He has chaired the economic sociology research network of the European Sociological Association, and is President of the Swedish Sociological Association. The main focus of his research is on economic sociology, especially markets. He has published two books on markets: Markets in Fashion: A Phenomenological Approach (2nd. ed. Routledge 2006) and Orderly Fashion: A Sociology of Markets (Princeton University Press 2010). Aspers has written on classical economists such as Alfred Marshall and Vilfredo Pareto, and published in journals such as the Journal of Economic Geography and Theory and Society.

1. Value in Markets; SECTION I: WHAT IS VALUABLE?; 2. Price and Prejudice: On Economics and the Enchantment (or Disenchantment) of Nature; 3. What is the Price of a Scientific Paper?; 4. The Value of Ethics: Monitoring Normative Compliance in Ethical Consumption Markets; 5. The Transcending Power of Goods: Imaginative Value in the Economy; SECTION II: AESTHETIC MARKETS; 6. Symbolic Value and the Establishment of Prices: Globalization of the Wine Market; 7. Pricing Looks: Circuits of Value in Fashion Modeling Markets; 8. Damien's Dangerous Idea: Selling Contemporary Art at Auction; 9. Infinite Surprises: On the Stabilization of Value in the Creative Industries; SECTION III: FINANCIAL MARKETS; 10. Forecasting as Valuation: The Role of Ratings and Predictions in the Subprime Mortgage Crisis in the US; 11. Selling Value in Kenya's Nairobi Stock Exchange; 12. Coping with Contingencies in Equity Option Markets: The "Rationality" of Pricing; SECTION IV: ORGANIZATIONS; 13. Valuing Products as Cultural Symbols: A Conceptual Framework and Empirical Illustration; POSTSCRIPT; 14. What's Valuable?