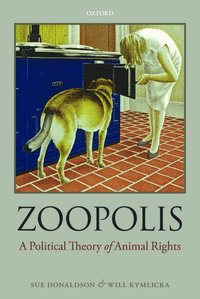 A Political Theory of Animal Rights

Ruth Abbey, Philosophy in Review In this careful, thoughtful, and engaging work, Sue Donaldson and Will Kymlicka affirm and extend the attribution of rights to animals. ... The book is thoroughly researched and engages a lot of literature about animals, both philosophical and sociological


Eva Meijer, Journal for Contemporary Philosophy convincing both in its criticism of existing animal rights theories and as the outline of a political theory...an important and original contribution to the debate about animal rights.


Nina Varsava, Humanimalia Zoopolis presents a meticulously principled, thorough- and maybe, hopefully, even realistic- theory, which in many ways improves upon preexisting theories of animal rights.


Steve Cooke, Global Policy Donaldson and Kymlicka's contribution builds upon attempts by others to extend justice to non-human animals in an original and compelling manner. They convincingly demonstrate that theories of animal rights lacking a political component are inadequate, and that traditional citizenship theory wrongly excludes many potential coauthors in the destiny of democratic communities.


Daniel Hutton Ferris, Politicsinspires.org will take the debate about the limits of liberal citizenship into radical new areas...Zoopolis breaks new ground by looking at animal rights from a genuinely political perspective. It's deliciously contentious thesis will force liberal political theorists to look much harder at the boundaries of citizenship.


Marta Tafalla, Dinoia Zoopolis is an amazing book, which proposes to reframe the debate on our relationship with animals in a new theoretical framework.


Tristan Rogers, Journal of Value Enquiry a remarkable landmark in the animal rights debate. Like what Nozick said of Rawls's A Theory of Justice, it would seem that animal rights theorists must either work within the theory put forward by Zoopolis or explain why not.


Alasdair Cochrane, The Philosopher's Magazine fascinating and path-breaking...there is a huge amount to commend in this rich and novel theory.. Zoopolis is a major contribution to both animal ethics and political philosophy, and will provide much interesting debate.


Steve Donoghue, Open Letters Monthly eloquent and extremely thought-provoking... astonishingly free of sentimentality while still brimming with passion... Books like this - meticulously thought-out, very attractively reasoned, with no hint of screed - do inestimable good in their incremental way, and Zoopolis is among the best I've ever read, mainly because it avoids the pitfalls of extremism that would make it look untenable to the unconverted.


Richard Keshen, Literary Review of Canada deeply serious and brilliantly written... Zoopolis is in fact a courageous book and an intellectual tour de force. It is the most important philosophical work on human-animal relationships since Singer's Animal Liberation... an inspiration to those people who want t...

<br>Sue Donaldson lives in Kingston, Canada where she writes essays, plays, and books, including a vegan recipe collection (Foods That Don't Bite Back) and a mystery novel for young adults (Thread of Deceit). <br>Will Kymlicka is the Canada Research Chair in Political Philosophy at Queen's University. He is the author of six books, including Contemporary Political Philosophy: An Introduction (OUP 1990; second edition 2002), Multicultural Citizenship (OUP 1995), and Multicultural Odysseys (OUP 2007).<br>