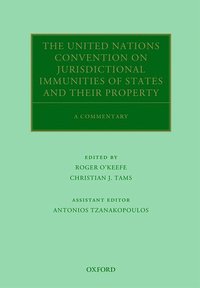 Natalino Ronzitti, Italian Yearbook of International Law The Commentary edited by O'Keefe and Tams represents a useful tool in offering a quick response to the queries that an interpretation of the provisions might raise. The propos that The Commentary aims to clarify and not complicate the issues is maintained and the book constitutes a valuable contribution for scholars and practitioners.

<br>Roger O'Keefe is a Senior Lecturer in Law and the Deputy Director of the Lauterpacht Centre for International Law at the University of Cambridge, as well as a Fellow and College Lecturer in Law at Magdalene College, Cambridge. He is the author of The Protection of Cultural Property in Armed Conflict (CUP, 2006) as well as of several articles on the immunities of states. <br>Christian J. Tams is Professor of International Law at the University of Glasgow (U.K.). He is a qualified lawyer in Germany (admitted 2005) and holds LL.M. and Ph.D. degrees from the University of Cambridge. His research in international law focuses on investment protection, the role of international courts and tribunals, and the law of State responsibility. In addition to his academic work, he has advised states in proceedings before the International Court of Justice (ICJ) and the International Tribunal for the Law of the Sea (ITLOS). He is a member of the German Court of Arbitration for Sports and of the ILA Committee on the Use of Force, and has held visiting appointments at universities in China, France and Lithuania. He is an editor of, inter alia, The Convention on the Jurisdictional Immunities of States and Their Property: A Commentary and The Development ofInternational Law by the International Court of Justice.<br>