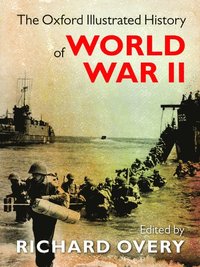 Roger Moorhouse, History Today ... The Oxford Illustrated History of World War Two is a thoughtful and thought-provoking volume, which succeeds very well in bringing at least a taste of the wealth of current Second World War scholarship to a wider audience. There is much here to admire; not least the erudition of the contributors and the eclectic and original selection of photographs ... an excellent, concise and enlightening volume. As such, it is a worth addition to the library of every
student and every scholar of the conflict.


Military History A stimulating and thought-provoking new interpretation of one of the most terrible episodes in world history.


Ireland's Eye The Oxford Illustrated History of World War II is an exemplary book that not only provides an insightful and in-depth analysis of the war from both sides, but does so while providing an astounding array of photographs, some in vivid colour, of the real and devastating effects of war experienced by both civilians and combatants.


Simon Sebag Montefiore, author of Stalin: the Court of the Red Tsar Compelling in its narrative, fascinating in its detail, magisterial in its analysis, global in its breadth, Richard Overy, one of our outstanding scholars of mid-20th Century history, here delivers a military, political and economic history of WW2, aided by a galaxy of distinguished scholars, that is essential, accessible reading for general readers as well as students.


David Reynolds, University of Cambridge, and author of In Command of History: Churchill Fighting and Writing the Second World War Incisive essays by leading scholars, richly illustrated with unfamiliar pictures, make this an ideal introduction to the defining conflict of the twentieth century - from which our contemporary world still struggles to recover.


Paul Kennedy, Yale University, and author of Engineers of Victory and The Rise and Fall of the Great Powers A welcome and most useful addition to the historical literature ... the photographs, many of them new to me, were a real delight. I recommend this book to anyone interested in the war.


M. A. Mengerink, CHOICE combines a breadth and depth not seen in much military history writing. The skillful analysis of each chapter does not sacrifice narrative ability to address topics ranging from the German, Italian, and Japanese conduct of the land, sea, and air wars to the political intricacies of the Grand Alliance, scientific innovation, and the cultural history of the war ... Did this reviewer mention the illustrations? Astounding.

Richard Overy is Professor of History at the University of Exeter. He is the author of more than twenty five books on the history of twentieth-century war and dictatorship, including the highly acclaimed Why the Allies Won (1995) and the prize-winning Dictators: Hitler's Germany and Stalin's Russia (2004). He is a Fellow of the British Academy and a Member of the European Academy of Sciences and Arts. His most recent book is The Bombing War: Europe 1939-1945 (2013), shortlisted for the Guggenheim-Lehrman Prize in military history.