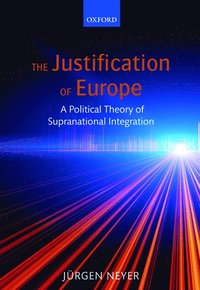 The Justification of Europe

A Political Theory of Supranational Integration

Bloggat om The Justification of Europe

<br>Jurgen Neyer earned his PhD at the Johann-Wolfgang-Goethe University in Frankfurt/ Main and his habilitation at the University of Bremen. He has taught and done research at various universities including the University of California at Berkeley, the Free University of Berlin, and the European University Institute in Florence, Italy. His research and teaching interests lie in the field of European integration theory and international political theory. His publications have appeared in a number of leading political science journals including the Journal of Common Market Studies, the Journal of European Public Policy, and the European Law Journal. He is Professor of Political Science at the European University Viadrina in Frankfurt (Oder) and the Managing Director of the Frankfurt Institute for Transformation Studies.<br>