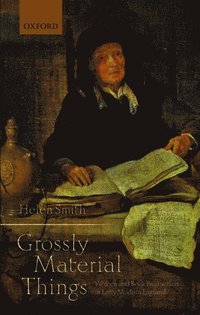 Jessica Malay, Women's History Review Smith has produced a study that argues convincingly for the integral engagement of women with the materiality of the printed text. The strength of this work comes from the wealth of illustrative examples placed within a convincing discussion of the many facets affecting the production and use of early modern books.


Christina Luckyj, Early Theatre Far from mere handmaids to their more accomplished male contemporaries, the early modern women who people this extraordinary book are revealed not only as patrons, printers, and translators of male-authored works, but also as stationers, chapwomen, and active readers who shape those works' very meanings. A welcome corrective to the familiar emphasis on prescriptive literature, Smith's work immerses us in the dirty, noisy world of early modern England where men and
women jostled for position in the burgeoning economy of London and beyond.


Alice Eardley, Journal of the Northern Renaissance brings a wealth of new insights to the field of book history


Maureen Bell, Times Literary Supplement Smith's emphasis on materiality certainly alerts us to some tantalizing glimpses of the place of women in both printing houses and Stationers' Hall.


N.C. Aldred, The Library Smith presents a meticulous study of the participation of women in all aspects of book production ... the volume may prove useful to anyone researching the social, economic, and intellectual composition of the book trade.


Andrew Fleck, Renaissance Quarterly Helen Smith's fascinating Grossly Material Things opens an important window onto the basic circumstances of the Renaissance printing house and sheds new light on the significant roles women played in early modern Englands print marketplace ... Combining elegant writing with an abundance of useful details, Smith's study demands that we pay greater attention to the colophons of our favorite Renaissance books ... When others explore the role of women in the
production of books in other markets, those scholars would do well to take Helen Smith's book as a model.


Tom Rooney, Early Modern Literary Studies Helen Smith's Grossly Material Things is a fascinating, insightful, superbly researched book on the contributions women made to manuscript and book production in the Early Modern period. Anyone interested in the history of reading or of the book will learn a great deal from her investigation ... The great strength of her work is to refocus our attention on the web of gendered relations in writing, translating, patronizing, publishing and reading in this
period.


Kathryn Narramore, Textual Cultures: Texts, Contexts, Interpretation Smith prods scholars to widen their definitions of textual labor to include books' physicality - an unexamined aspect of their cultural and intellectual impact.


Natasha Korda, Joural of British Studies This ambitious, well-researched, and timely study sets out to revise our unde...

Helen Smith is Lecturer in Renaissance Literature at the University of York. She has published widely on the history of books and reading, and is co-editor (with Louise Wilson) of Renaissance Paratexts (Cambridge, 2011). She is Co-Investigator on the AHRC-funded project, 'Conversion Narratives in Early Modern Europe'.

List of abbreviations; List of illustrations; Acknowledgments; Note to the reader; Introduction: 'Grossly Material Things'; 1. 'Pen'd with double art': Women at the Scene of Writing; 2. 'A dame, an owner, a defendresse': Women, Patronage, and Print; 3. 'A free Stationers wife of this companye': Women and the Stationers; 4. 'Certaine women brokers and peddlers': Beyond the London Book Trades; 5. 'No deformitie can abide before the sunne': Imagining Early Modern Women's Reading; Bibliography of Works Cited; Index