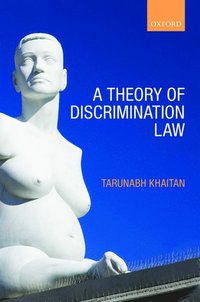 A Theory of Discrimination Law

Deborah Hellman, Ethics Tarunabh Khaitan's A Theory of Discrimination Law is an excellent contribution to a burgeoning literature on the conceptual and normative foundations of discrimination law. Indeed, its ambitious scope and the careful argumentation it contains make it one of the best in the field.


Colm O'Cinneide, Oxford Journal of Legal Studies In general, this book is a significant achievement. Khaitan's arguments make an invaluable contribution to the diffuse theoretical literature on discrimination law, and are bound to become a major point of reference in conceptual debates about this highly significant area of law.


Kasper Lippert-Rasmussen, The Modern Law Review The central ambition of Khaitans book is to give a theoretical account of the legal model of regulating discrimination. His favoured account is a liberal, freedom based, group-disadvantage-focused account, which allows for asymmetric antidiscrimination norms and explains the unity of discrimination laws, where these include reasonable accommodation, affirmative action and harassment norms...It offers a number of excellent challenges to the views of people like myself
who are inclined to think of discrimination as having something to do with equality and that the distinction between direct and indirect discrimination is to be drawn on the basis of the presence or absence of certain mental states of the discriminator... Khaitans account is sophisticated, extensive
and among the very best normative accounts of discrimination law available.


Laura Carlson, Retfrd Regardless of whether the reader, in the guise of legislator, academician, student, lawyer, activist or layperson, agrees with this theory, Khaitan has so neatly presented each step in his approach and in such a manner that any response, whether positive or negative, requires serious contemplation and argument... As a teacher in the field of discrimination law, I am grateful for Khaitans theory of discrimination law, as it gives a platform for students to work from
in their attempts to master the tricky shoals of discrimination law and human rights in general.


Sophia Moureau, Law and Philosophy There is a remarkable amount to think about in this book, and it accomplishes a great deal. It sheds light on the commonalities between discrimination laws from different jurisdictions. It makes a significant contribution to methodological questions by insisting on a distinction between the ultimate aims of discrimination law and the particular tools that it uses to achieve these aims. And it articulates a novel perfectionist and sufficientarian approach to
discrimination, an approach that merits significant consideration from both legal and philosophical scholars.


Reva B. Siegal, Nicholas deB. Katzenbach Professor, Yale Law School This ambitious book delivers. Its analysis of discrimination law in liberal societies is compelling, offering a lucid introduction for newcomers and a challenging ...