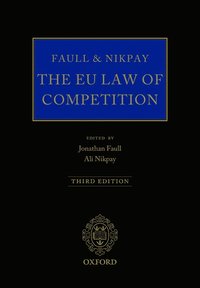 Faull and Nikpay: The EU Law of Competition


Mark Fuse, Professor of Competition Law and Policy, University of Glasgow The third edition of this extremely reliable text is therefore greatly to be welcomed. Quite simply Faull and Nikpay is the best single volume work dealing with EU competition law that is available, and all associated with its writing and publication should be congratulated ... this text is truly comprehensive ... Faull and Nikpay is the best of the breed.


Frank Fine, Head of International Antitrust, DeHeng Brussels For readers unfamiliar with this work, it is the only treatise on EU competition law whose contributors are active or former European antitrust enforcers ... There aren't many books on EU competition law that this writer would deem as 'must haves'. But this third edition of Faull and Nikpay surely falls within this highest category. Messers Faull and Nikpay should be congratulated for their Herculean efforts in producing this extraordinary work.


Valentine Korah, UCL OUP now sells most of the best large books published on competition law and policy ... One very helpful feature of the first edition is that it has attracted postgraduate students to read the book, which contains a substantial introduction to the relevant economic theory ... Long may the original contributors have the energy to edit such a perceptive and substaintial work.

<br>Jonathan Faull, Director General, Internal Market and Services, European Commission, Ali Nikpay, Senior Director, Case Scrutiny and Competition Policy, Office of Fair Trading <br>Jonathan Faull joined the European Commission in 1978 after studying law at the University of Sussex and the College of Europe (Bruges). He worked in various positions in the Directorate General for Competition and was appointed Deputy Director General in 1999. From 1989 to 1992, he was a member of the Cabinet (private office) of Sir Leon (now Lord) Brittan. He was Commission Spokesman and Director General for Press and Communication (20002003) and Director General for Justice, Freedom and Security (formerly Justice and Home Affairs) 20032010. He is Professor of Law at the Vrije Universiteit Brussel and the College of Europe. <br>Ali Nikpay is a Senior Director at the Office of Fair Trading, London. He is responsible for cartels and criminal enforcement. In January 2011 he was also appointed as one of the two main Mergers Decision Makers. Prior to running the cartels division he was Senior Director for Policy. Before joing the Office of Fair Trading he worked at Clifford Chance and DG Comp and he co-edits "The EC Law of Competition," one of the leading texts in the field. He is also on the Editorial Boards of World Competition, and the European Competition Journal, and was a visiting Fellow at the London School of Economics.<br>