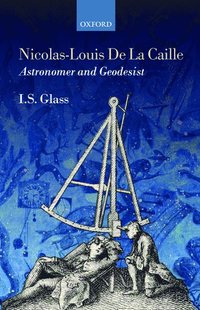 av Ian Stewart Glass
Inbunden Engelska, 2012-12-13
589
Köp
Spara som favorit
Skickas inom 10-15 vardagar.
Fri frakt inom Sverige för privatpersoner.
Finns även som
Visa alla 2 format & utgåvor
This is the first comprehensive biography of one of the greatest and most careful observational astronomers of all time. He mapped the southern sky and named many of the constellations. In addition, he contributed to geodesy, navigation, and celestial mechanics.
Visa hela texten

Allan Chapman This is an exact and detailed book, not only dealing with a great astronomer, but exploring the less-well-known world of 18th-Century Frech research astronomy. It is lucidly written and thoroughly documented.


William Tobin, Southern Stars Another strength of Glass's book is that the author is widely read and so explains details and puts them in context.


Lee Labuschagne, The Cape Times It is recomended for those interested in the history of the Cape, astronomy or the mapping of southern Africa.


Owen Gingerich, Harvard-Smithsonian Center for Astrophysics Professor Glass brings brilliantly to life the indefatigable 18th-century Frenchman De la Caille, who in his two-year sojourn at the Cape of Good Hope named more constellations than any other recorded astronomer. Vividly portrayed are his triumphs and failures, his friends and detractors.


Peter Harman, Department of History, Lancaster University La Caille was a leading figure among eighteenth-century observational astronomers, and his observations at the Cape of Good Hope are discussed in this eloquent and informed narrative. While his period at the Cape forms only a part of his life and work, it is no doubt the most striking in his biography.


Robert Smith, University of Alberta Nicolas-Louis De La Caille was an engaging and significant figure in the fascinating world of eighteenth century science. No armchair philosopher, La Caille travelled far in pursuit of scientific truths. Ian Glasss book on La Caille will appeal to astronomers and geodesists concerned with the development of their disciplines, historians of science, and readers drawn to adventurous characters.


Quest, Academy of Science of South Africa The approach to De La Caille's life makes what could have been a dry account of a long-dead scientist into an exciting look at the way that scientific thought and theory were developing in the early days of mathematics, physics and astronomy.


Allan Chapman, Observatory This is an excellent and detailed book, not only dealing with a great astronomer, but exploring the less-well-known world of 18th -Century French research astronomy. It is lucidly written and thoroughly documented.

<br>Ian Glass is an Astronomer at the South African Astronomical Observatory, and Adjunct Professor at James Cook University. <br>His previous books include Revolutionaries of the Cosmos: The Astrophysicists, Victorian Telescope Makers: The Lives and Letters of Thomas and Howard Grubb, and Proxima: The Nearest Star (Other than the Sun).<br>