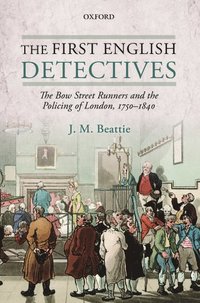 Clive Emsley, History Today ... the foremost historian of crime, the law and policing in Hanoverian London, brings his formidable knowledge and astute perception to tracing the history of the Bow Street police ... a short review cannot do justice to the research and shrewd judgements that underlie this lively volume ... anyone interested in the history of crime and policing in England cannot afford to ignore it.


John Barrell, London Review of Books [a] superb book ... As those who know his earlier works on crime, policing and criminal justice in the 18th century would expect, one of the great strengths of this book is the sense it gives of the way the changing activities of the runners intertwined with changes in other brances of the criminal justice system - the changing functions of the magistrates' courts, for example, as awareness grew of the need to separate the investigative and judicial functions of the
magistracy, and to extend the system of police courts more widely through London.


The Canadian Journal of History Beattie's lively history of the Bow Street Runners is a first-rate account of the evolution of 'thief-takers' into a professional crime-solving force after the group's creation by Henry Fielding.


David Churchill, Crime, History & Societies The publication of a new book by John Beattie is inevitably a major event in criminal justice history. As a pioneering historian of eighteenth-century crime, law and punishment, his previous works instantly became foundational studies in the field. In this latest offering, Beattie turns his formidable historical acumen to research on the most famous body of police officers prior to the new police the Bow Street runners. The result is an extremely thorough and
insightful account of crime and policing, yet one which nonetheless signals the persistent complexities which surround the interpretation of nineteenth-century police reforms.


Boyd Hilton, English Historical Review Beattie has brought great clarity to a fiendishly difficult subject, and his book will surely remain authoritative for many years to come.


David Churchill, Crime, History & Societies This book offers a sophisticated and lively account of eighteenth-century policing and the path to reform ... we have Beattie to thank for another impressive book