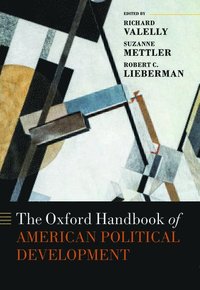 Richard Valelly is Claude C. Smith '14 Professor of Political Science at Swarthmore College, and author of American Politics: A Very Short Introduction (Oxford, 2013), the multiple prize-winning The Two Reconstructions: The Stuggle for Black Enfranchisement (Chicago, 2004), and Radicalism in the States: The Minnesota Farmer-Labor Party and the American Political Economy (Chicago, 1989). Suzanne Mettler is the Clinton Rossiter Professor of American Institutions in the Government Department at Cornell University. Her recent books include Degrees of Inequality: How Higher Education Politics Sabotaged the American Dream, and The Submerged State: How Invisible Government Programs Undermine American Democracy. She has been the recipient of the Derthick Award for Dividing Citizens: Gender and Federalism In New Deal Public Policy (Cornell, 1998) that has made an enduring contribution to the study of federalism, the Greenstone prize of the Politics and History section of the American Political Science Association (APSA), and on two occasions, the APSA's Kammerer Award for the best book on US national policy. Robert C. Lieberman is Provost and Professor of Political Science at the Johns Hopkins University and the author of Shifting the Color Line: Race and the American Welfare State (Harvard, 1998), which won the 1999 Lionel Trilling Award among other prizes, and Shaping Race Policy: The United States in Comparative Perspective (Princeton, 2005).